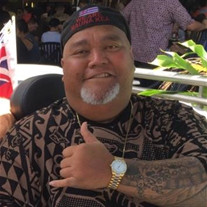 On Tuesday April 23, 2019 Allandave Mokulani Makue, brother of Antoinette, Anthony (Deceased), Annette, and Elizabeth passed away at the age of 58 years. Allandave was born on April 25th, 1960 to Anthony and Elizabeth Makue in Honolulu, at St. Francis Hospital. He attended Puuhale Elementary school, until his Ohana moved to Waipahu. He was a graduate of Waipahu High School, where he played football, and held the record for weightlifting in several divisions. Allandave kept in touch with several of his classmates from elementary thru high school and thru out his whole life even to this day. In 2018, he received an award for Outstanding Community Contributor from Kaulana O Waipahu, sponsored by Community In Schools Hawaii, for helping elders and watching out for them within Waipahu Hall Complex, where he resided. Allandave had a passion for cooking and new recipes. He loved sharing his pictures of the foods that he cooked, on facebook and instagram. He was an avid music lover especially songs from Bradah Iz Kamakawiwole. If anyone seen him or passed him by, on the streets of Waipahu, could hear his music playing from his wheelchair and his Hawaiian flag that he had attached to the back of his wheelchair. He was a pretty good singer too. He had a contagious smile, and his laughter infectious. He was a Happy Go Lucky sort that accepted each day for what it was, with a “Don’t worry, Be Happy” attitude. Allandave is survived by sisters, Antoinette Leando, Annette (Jack) Moananu, Elizabeth (Marvin) Goodhue, Annette Makue Kaopio wife of (deceased brother) Anthony. Including nieces, nephews, cousins and countless friends near and far. Services will be held on Saturday, June 8, 2019, at Oahu Cemetery, 2162 Nuuanu Avenue, Honolulu, HI. From: 09:00 am – 10:00 am Pay last respects 10:00 am – 11:00 am Prayer Service, Eulogy 11:00 am - 1:00 pm Lunch will be served. 1:00 pm lunch and service has ended. The scattering of Allandave ashes to be determined at a later date by the Makue Ohana. Aloha!

On Tuesday April 23, 2019 Allandave Mokulani Makue, brother of Antoinette, Anthony (Deceased), Annette, and Elizabeth passed away at the age of 58 years. Allandave was born on April 25th, 1960 to Anthony and Elizabeth Makue in Honolulu, at St.... View Obituary & Service Information

The family of Allandave Mokulani Makue created this Life Tributes page to make it easy to share your memories.

Send flowers to the Makue family.