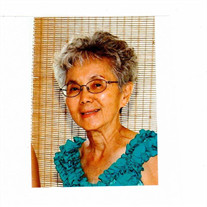 Amy Y. Kimura, aged 79 of Makiki, passed away on Monday, November, 26, 2018. She was born in Waipahu to the late Misao F. Mukaigawa and Hideo Kimura on April 6, 1939 and grew up in Kalihi, Kaimuki, Palolo, Pawa'a, and McCully. She attended University Elementary, University Lab School, and graduated from Mid-Pacific Institute in 1957. She earned a bachelor’s degree from University of Hawaii in 1961 where she joined the Phi Beta Kappa Honors Society. She pursued a graduate degree in Psychology at University of North Carolina at Chapel Hill, but left without finishing her degree to work as a social science researcher at Bell Labs followed by Columbia University's School of Social Work in New York City. While living in Manhattan, she met and married Charles H. Carole. They moved to Hawaii and made their home in Makiki. Amy was a homemaker and managed several rental properties, but her desire for economic, social, and environmental justice, and willingness to stand up for herself and others led her to be involved in her children’s school PTSAs, community (Hui o Makiki), local politics, and other organizations. She stayed well-informed to the end through Civil Beat, Hawaii and National Public Radio, and other media. She was a patron of the arts and often attended shows at the Honolulu Museum of Art/Doris Duke Theater, Manoa Valley Theater, Kumu Kahua, and Movie Museum. She is survived by her husband, Charles H. Carole, and her daughters, Lee T.C. Kimura and Tracy M. Carole. A memorial service celebrating her life will be held on Saturday, January 19, 2019, from 10:00 AM to 2:00 PM at the Japanese Cultural Center, Manoa Grand Ballroom, 2454 S. Beretania St., 5th Floor, Honolulu. Please RSVP to 1-888-902-3011 x4197 or www.sendrsvp.com/4197. Memorial donations can be made to Democracy Now or Earthjustice.

Amy Y. Kimura, aged 79 of Makiki, passed away on Monday, November, 26, 2018. She was born in Waipahu to the late Misao F. Mukaigawa and Hideo Kimura on April 6, 1939 and grew up in Kalihi, Kaimuki, Palolo, Pawa'a, and McCully. She attended University... View Obituary & Service Information

The family of Amy Yoshiye Kimura created this Life Tributes page to make it easy to share your memories.

Send flowers to the Kimura family.