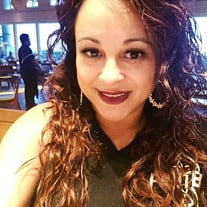 Antonia Victoria Garcia burst to Life on June 18th, 1977, grabbing it by the horns. She was born in Denver, Colorado as the second-eldest of five siblings, and spent most of her life exploring mountains up until her first heart surgery in 2013. It was then she decided to buy a 1-way ticket to the Hawaiian Islands, and, for the past six years of her life she spent it becoming a local on O’ahu, the island that became her second home. Her proud zest for life, and loveable nature, had a contagiously profound effect on those around her, and made it especially hard to bare the news. On the evening of April 11th 2019, at the age of 41, in Honolulu Hawai’i, she was called to rest after suddenly succumbing to her already weakened heart, and now rests in the arms of Our Father. She got to live everyday and enjoy what many of us describe as paradise. There are some people who cannot say that they’ve seen the ocean, and yet amongst coconut trees, Antonia danced in the wind; and under the sun, she played in the Hawai’ian waters, literally submersing herself in her Paradise. She was an amazing person who loved everybody who came into her life and was able to be a part of her experience. She was adventurous. In every sense of the word. She lived every day like it was her last—with no fear and absolutely no regrets. She dove headfirst into everything she did and she wanted to take everyone along for the ride. She was an amazing Daughter, Sister, Mother, Aunt, Nina, Cousin, friend and everything in between because she was always there for whoever needed her to be, whenever the needed her yo be. She is survived by her mother Victoria Garcia, her two brothers Jesus (Noni) Garcia and Vicente Garcia. Her 2 younger sisters Valentina (Nick) and Esperanza Garcia; along with their children Valentina, Nick, and Antonio and her daughter BriAna Garcia. She also had many Cousins and Friends. Antonia always surrounded herself with good company, making new memories every single day, and also making sure to capture as much of it on camera. She’d never miss a beat, snapping a photograph of every moment—to savor it the way so many of us forget how to do. Thank you to all of our friends and family who have reached out since Antonia's passing. This has been a difficult time for all of us, and the outpour of love and support is more than we could have asked for. We would also like to give an especially heartfelt “thank you” to those who were able to donate to Antonia's heart fund. It was thanks to your generosity that we, as a family, were able to fly out and be with her when she needed us most. It gave us all the opportunity to be by her side and say our farewells in peace and love, and, for that, we, cannot begin to express our gratitude for giving us the opportunity to make that possible. Before she left us, she was showered with the love of family, and the comfort & support of friends. It’s these things that make it easier, as we take it day by day, to remember how she wanted us to be happy, and to know that living life to the fullest didn’t mean living on the wild side. It meant finding the meaning in every given moment, and sharing it with those around you. We love you, Antonia. May you rest in your new paradise.

Antonia Victoria Garcia burst to Life on June 18th, 1977, grabbing it by the horns. She was born in Denver, Colorado as the second-eldest of five siblings, and spent most of her life exploring mountains up until her first heart surgery in 2013.... View Obituary & Service Information

The family of Antonia Victoria Garcia created this Life Tributes page to make it easy to share your memories.

Send flowers to the Garcia family.