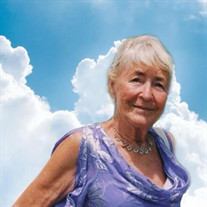 Antonie "Toni" Grossi Butler, beloved mother, grandmother, great grandmother, and friend, passed away November 17, 2020 at the age of 81. She battled ovarian cancer for a year and a half, after initially being given just 2 months to live, and in that time continued, as she always had, to live life on her terms and to the fullest. She was born in Wiesbaden Germany on November 9, 1939 and was the 4th of 5 daughters. Her father wanted a boy so she was christened with the name Antonie. She really was a rough and tumble tomboy in her youth, but she grew into quite a beauty. Times were hard, but Toni had an adventurous, fun-loving and sometimes mischievous spirit that got her into some tight spots, and the smarts to get herself out, traits she carried throughout her life, especially when hanging out with her best friend, her little sis Renata Toni was married three times. Her first marriage lasted a few short years. In 1966 she met a scrawny American Airman and two years later traveled half way around the world, from Germany to Hawaii, to marry Orlando "Andy" Grossi Jr. They were together 25 years until he passed away. Her final marriage, as fate would have it, was in 2007 to Robert "Bob" Butler, a friend she had known for years prior. They were married for 10 years until he too passed. She graduated high school and started working in a factory at the age of 13. When she got to America she didn't speak English. She taught herself by watching tv and reading the newspaper and was able to secure herself a job as a housekeeper at Kahala Hilton. Later she started in house keeping at Holiday Inn Waikiki but very quickly transitioned into the food pantry were she sustained a long, rewarding career. After she left Holiday Inn she worked as a lei greeter, interpreter, and property manager, but those were just her occupations. Her hobbies and passions included dancing, meditation, reading scripture and inspirational passages, and spending time with family and friends. She had an eye for fashion and loved to dress like every day was a special occasion. She was a Luk Tung Kuen master, studied herbology, acupuncture and along with these learned Mandarin. Toni was very proud to have become an American citizen after calling Hawaii home for so many years. She loved this island and she loved the land, she worked in her yard almost daily cultivating her plants and flowers, arranging her rock garden and always finding something to keep her busy. She had always been a hard working, determined woman with a tough outer shell but a very big heart. Toni was the life of the party, and we know there are many arms open to welcome her to her heavenly home where she is pain free, dancing and rejoicing. She is survived by sisters, Gertrude Hohmann, Elfride Geschwindner, and Renata (Donald) Robinson. Brother, Hans Roeder. Sons, Thomas (Petra) Vones, and Orlando "Rocky" Grossi III. Daughter, Diana "Patty" (Stanford) Chun. Grandchildren, Cheyenne Vones, Shelby (Clifford) Ka'auku'u, Angelina (Ricky) Ferguson, Jasmine Grossi, Jessica Grossi, Andy Grossi, Joey (Gabriel) Ingram, Amanda (Jeffrey) Nelson, Rueben (Megan) Chun, and 13 Great grandchildren. Her legacy lives on in everyone she touched... So thank you Lord for the life you gave her. Thank you Lord for taking away her pain. May she be by your side for all eternity. In Jesus Christ we pray, AMEN.

Antonie "Toni" Grossi Butler, beloved mother, grandmother, great grandmother, and friend, passed away November 17, 2020 at the age of 81. She battled ovarian cancer for a year and a half, after initially being given just 2 months to live,... View Obituary & Service Information

The family of Antonie Grossi Butler created this Life Tributes page to make it easy to share your memories.

Send flowers to the Butler family.