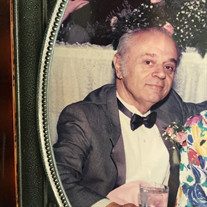 Born January 21, 1930 in Paks, Hungary Died: May 1st 2017 in Honolulu Hawaii Survived by his wife of 51 years, Anna Janko Children: Marianne Keenan Josephine Lesa (Fa’afetai) Margaret Whitfield (John) Steven Janko Grandchildren: Robi Keenan Cassandra Lesa Isabella Lesa Anna Lesa Scottie Janko Services will held on: Saturday, May 27th Time: Visitation by family & friends at 10:00 a.m. Funeral services at 11:00 At The Church of Jesus Christ of Latter-day Saints 1723 Beckley Street Honolulu, Hawaii 96819 Bela Janko, P.E. Born on January 21, 1930 in Paks, Hungary, Bela studied civil engineering at the technical university in Budapest. After escaping the 1956 Hungarian revolution, Bela was a political refugee in Italy. In response to an invitation by the Australian government to displaced Hungarian political refugees, he traveled from Italy to Tasmania, an island state of the Commonwealth of Australia. Bela lived and worked in Tasmania as an engineer until moving to Sydney, Australia. He met his future Hungarian wife, Anna, in Sydney. Before getting married, he took an around-the-world voyage visiting many exotic locations including Japan, Samoa and Hawaii. During this time, Bela also spent a year working in American Samoa as a public works civil engineer. After his travels, Bela was determined to become an American citizen. A distant uncle in Chicago helped Bela relocate and find work in this Midwestern American city. Anna joined him in Chicago where they soon married. After 2 years of cold winters, Bela was determined to relocate to Hawaii, a destination he dreamed of as a youngster. Pointing at a bridge, his father once told him that if he learned to build a bridge he could travel anywhere including Hawaii. In 1969, with the help of a Hungarian friend that he met during his trip to Hawaii, Bela was retained by Richard M. Libbey's Consulting Structural Engineering firm where he enjoyed a 30 year career. This firm, currently Libbey Heywood, Inc., designed many of Hawaii's high rise buildings including hotels, condominiums, commercial properties, and luxury residences as well as special projects. Bela was always excited and proud of his engineering work. In 1974, Cardinal Mindszenty visited Hawaii on a mission to meet his scattered Hungarian flock around the world. Cardinal Mindszenty instructed Bela, Anna and the other Hungarians to maintain their deep culture heritage. Bela was the first president of the Hungarian Americans of Hawaii club and remained a life long member.

The family of Bela Janko created this Life Tributes page to make it easy to share your memories.

Send flowers to the Janko family.