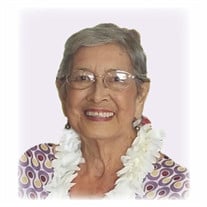 In Memory of Cathleen Mattoon July 14, 1932 - March 10, 2021 Cathleen Josephine Pi`ilani Mattoon passed after a life of living, loving and purposed service to her `ohana, friends and community. Cathleen, also known as Cathy and Pi`ilani, was born in Honolulu and raised in Honolulu town, Manoa and Punalu`u, O`ahu. Known to `ohana as Pi`ilani, she was quite young when living in Honolulu town. Memories of being one of the youngest of her Aunty’s `ohana hula halau worked their way into stories of performing, and photographs of her and `ohana dancing. After the bombing of Pearl Harbor, Pi`ilani’s mother moved the `ohana back to Punalu`u away from the threat of war. Pi`ilani talked about living in an upcountry hale in Punalu`u where she helped with lo`i kalo and a seaside hale where she did such tasks as gathering eggs and collecting `opae, once Tutu emptied out her pae pae net. Pi`ilani was identified as Cathleen in school. She attended Hau`ula Elementary School, walking to and from Punalu`u each day with siblings and friends. As Cathleen grew, she began to help in her mother’s eatery, Mary’s Sandwich Shack. When she was ready for seventh grade, she was selected from Hau`ula Elementary to attend Kamehameha Schools School for Girls. Cathleen recalled taking a train from Punalu`u to Kahuku, traveling with her `ohana or friends to watch movies as a youth and long bus trips from Kamehameha Schools to home on weekends. The bus ride gave Cathleen one day-and-a-half to be with her `ohana on the weekend. Cathleen attended the Kamehameha School for Girls and graduated in 1950 with classmates who she maintained friendships. During her time at Kamehameha she was called upon because of her experience with Hawaiian practice, hula and language to become a spokesperson from their student Hawaiian Club. She introduced each grade (“class of”) during early years of the Kamehameha Song Contest. Cathleen was a Reserve Officer Training Corp Sponsor for Creighton Ualani (Mills) Mattoon in high school. Cathleen and Creighton met at Kamehameha Schools where they dated and graduated. They married in 1952. Cathleen and Creighton knew each other for almost seventy years and were married for sixty-four. During their time on the Continent (United States), Cathleen and Creighton gave birth to three of their five children. As a young adult, Cathleen became known as Cathy among friends and coworkers. She worked at many jobs while on the Continent including office receptionist and clerical assistant to colleagues at research organizations in Washington, D. C. Cathy and Creighton lived in California, Virginia, Colorado and Kansas before returning to Hawai`i in 1962. Cathy, Creighton and their children lived for a time in Manoa, then in Kane`ohe where the children attended local schools. The `ohana attended Pope Pius the X church in Manoa and St. Ann’s Church in Kane`ohe practicing the faith Cathy had been raised in. She has ancestors at rest in the small Catholic cemetery across the street of St. Ann’s church. Love for Punalu`u and extended `ohana brought Cathy, Creighton back home to Punalu`u in 1972. From the time they returned to Punalu`u, Cathy and Creighton involved themselves in significant community activity and issues. Cathy was an instrumental participant in writing the petition forming the Ko`olauloa Neighborhood Board, and served on the Board as member or as Chairperson for several decades. Cathy and Creighton were part of the Punalu`u Community Association, playing leadership roles there too. Together Cathy and Creighton helped in pushing back urban development in Ko`olauloa, confirmed in the knowing that urbanization of `Oahu is not in the best interest of anyone. Cathy and Creighton are two of the founding members of “Keep the Country Country”, working tirelessly to preserve the culture and rural lifestyle of all rural areas in Hawai`i nei. Cathy was a dedicated member of the Ko’olauloa Hawaiian Civic Club. She lived her Hawaiian culture. She taught many of us to make `inamona, and how to gather and string pipipi shell lei. She knew where the white and yellow ginger grew in Punalu`u Valley and took `ohana and friends hiking routinely. Cathy stepped up her kuleana and learned hala weaving, kapa making, and protocols for various Hawaiian practices. She worked with Creighton and others to malama kupuna iwi from Mokapu moku and Ko`olauloa, and was active in several Native Hawaiian organizations. Over her lifetime Aunty Cathy, as became called by most, developed a strong sense of self and encouraged others to do the same. She had an even stronger sense of commitment to maintain, nurture and extend her cultural roots. There are many young women and men that she encouraged to excel as individuals, as community, as people, as lahui. Cathy is preceded in death by husband Creighton and survived by her five children Malia Newhouse (Paul Kaipo), Kimo Mattoon (Bobbie), Creighton Mattoon, Jr. (Lianne), Margaret Kau`i Weiss (Greg) and Peter Mattoon (Adele). She also has eleven grandchildren and three great grandchildren. Cathy always spoke with happiness about her children, their families, their accomplishments and her hopes for them. `Ohana was everything to Cathleen Josephine Pi`ilani Mattoon. A formal Celebration of Life will be held in Spring 2022. .

The family of Cathleen Josephine Mattoon created this Life Tributes page to make it easy to share your memories.

Send flowers to the Mattoon family.