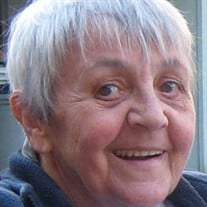 Our dear cousin, auntie, and friend, Collette passed away on May 14 in Kaneohe, Hawaii at the age of 83. Born on June 18, 1937 in Leominster, Massachusetts, Collette was the daughter of Collette Adelaide Hutchinson and Roland Kermit Madden. After graduating from Boston University in 1957 with a BS in Biology and obtaining her certification in cytotechnology from Massachusetts General Hospital, Collette moved to Hawaii and first worked as a laboratory technician at Kapiolani Medical Hospital in Honolulu before volunteering to serve in the Peace Corps in Thailand. Upon returning from Thailand, Collette moved to Kauai for several years, becoming the chief medical technologist at G.N. Wilcox Memorial Hospital. In the early 1990s, Collette left Kauai to return to Oahu and became the chief laboratory surveyor for the State of Hawaii until her retirement in 2004. Although Collette never married, she was surrounded by family and friends throughout her life. From Thanksgiving to trips abroad, she became an integral part of every family gathering of her aunt and uncle, Peggy and Frank Haines. She was a fabulous cook and orchestrated several family meals. Thanksgiving was her favorite and she would join the family at the home of her cousin and husband, Mallory and Pete Armstrong, where she would cook up a multi-course hearty meal for a few dozen. While in Thailand, she became fluent in the language and enjoyed ordering dishes in her favorite restaurants in Thai. Collette was fond of many things, but the one which gave her the most freedom was flying. She was a licensed small craft pilot. She had a brilliant mind as shown in her successful career and was able to explain the most complex medical topics in terms that anyone could understand. She loved animals and always had a pet cat or dog. Collette is survived by her niece, Cheryl Sallen, and nephew, Francis LeBlanc Jr., and numerous cousins. Her parents, sister Jane Madden LeBlanc, and brother Richard Madden predeceased her. Donations in Collette’s memory can be made to the Hawaiian Humane Society, 2700 Waialae Avenue, Honolulu, HI 96826.

Our dear cousin, auntie, and friend, Collette passed away on May 14 in Kaneohe, Hawaii at the age of 83. Born on June 18, 1937 in Leominster, Massachusetts, Collette was the daughter of Collette Adelaide Hutchinson and Roland Kermit Madden. After... View Obituary & Service Information

The family of Collette Frances Madden created this Life Tributes page to make it easy to share your memories.

Our dear cousin, auntie, and friend, Collette passed away on...

Send flowers to the Madden family.