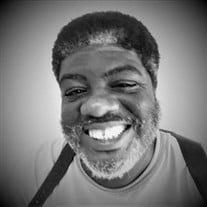 David Antonio Peterkin was born on October 25th, 1969 in Mount Vernon, NY to Libert Peterkin and Deleta McInnis. He was the oldest of three sons. He graduated from Mount Vernon High School and went on to take courses at Morgan State University. As for his vocation, he was the veritable Jack of All Trades. Over his lifetime, he worked as a chemist, in retail and foodservice and even tried his hand at farming. At his core though, David was an artist. He loved to draw and come up with story lines for graphic novels and movies. Those who knew him well knew that his tales were innovative, intricate and quite creative. A very important part of David’s life was cooking and sharing food with friends and family. He completely ruined his wife and children for steak eaten outside of the house because it was just never as delectable. He also loved to barbeque and was known for making the best spaghetti you ever had. He made it a couple of times for the teen fundraiser at church for those going to teen camp. David was the kind of person that looked for folks at church and if he didn’t see them more than once, he would take note of it and check up on them. He wasn’t one for small talk, if he asked you how you were doing he really wanted to know. He didn’t mince words either. The terms “straight shooter” and “shoots from the hip” were terms that could easily describe him. He had a keen sense of people’s character and was usually right about their intentions and would tell them, sometimes to their chagrin. David spent his life sticking close to his family, preparing and eating good food, worshipping God and having an impact on everyone he met. From his stature to the timbre of his beautiful voice, he always left an impression. He was unique in every way that mattered. He will be missed dearly and never forgotten by those who knew and loved him. David was predeceased by his Father Libert Peterkin, his mother Deleta Peterkin and his daughter Phoebe Grace Peterkin. He is survived by his brothers Libert Peterkin and Vincent Peterkin. He is also survived by his wife Suzette and their children Olivia, Chloe’, David Jr., Gabriel and Noah. There never was another like him and never will be, rest in love David.

David Antonio Peterkin was born on October 25th, 1969 in Mount Vernon, NY to Libert Peterkin and Deleta McInnis. He was the oldest of three sons. He graduated from Mount Vernon High School and went on to take courses at Morgan State University.... View Obituary & Service Information

The family of David Antonio Peterkin created this Life Tributes page to make it easy to share your memories.

Send flowers to the Peterkin family.