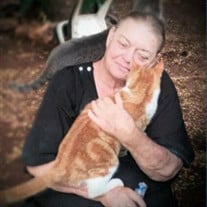 ELISE ANN JONES Sunrise January 22. 1949 Sunset June 10, 2021 Elise Ann Jones (72) of Aiea departed the confines of her earthly body at 1:25pm on June 10, 2021 at home due to stage 4 breast cancer. Elise was a third-generation islander and O`ahu resident for 46 years. Her grandfather, Dr. Kenneth Paul Jones SR was the director of Kula Sanatorium on Maui where her father, Dr. Kenneth Paul Jones III, Captain USN was raised. Elise was born in Detroit Michigan to Marion Elise (Smith.) Her father was a captain and Doctor of Psychiatry in the United States Navy. Growing up, Elise lived all over the mainland USA and in Japan. As a Navy wife, Elise moved to Hawai`i with her three children: Cassandra Lee, Richard Daniel II, and David Paul in 1975. Elise was missing a half credit for her high school diploma when she abruptly had to move from Japan back to the United States. She finished her credit and was awarded a high school diploma from Aiea High School. She attended Kapiolani Community College before getting her Hawai`i state real estate license. Elise worked for the USO at Honolulu International Airport until the early 80’s. Also, during this time, she worked as a counter for an inventory counting company, a jewelry maker for a Hawai`i souvenir company, correspondence coordinator, mother of three, and Navy Wife before she obtained a Hawai`i Real Estate License and became a rental agent in the early 80’s to 2000’s. She also was a driver/boat driver for Meagan Sportfishing (Waianae Boat Harbor) in 90’s to 2006. Elise is preceded in death by both her parents, Dr. Kenneth Paul Jones III Captain US Navy (46) died on active duty and Marion Elise (Smith) Jones (36) died when Elise was 14 years old; love of her life, Henry (Hank) Ellis Chase (60) Chief USNRet and Boat Captain and owner of Meagan Sportfishing in Waianae; her son, David Paul Wilkinson (29); her grandchildren: Kaui Solomon Wilkinson (0) and Ian Paul Wilkinson (3 days); son-in-law, William Herbert Morehouse IV (65), former daughter-in-law and mother of Skylah Rose, Teresa Jane Wilkinson (48.) Elise is survived by her daughter, Cassandra Lee Morehouse aka Sandra Chase (53); her son, Richard Daniel Wilkinson II (50), and wife, Jiang; her grandchildren: Skylah Rose Wilkinson (18); Justin Wilkinson (13), and Lucy Zha (18); her sisters: Nancy and Leslie (Jones) and one niece. Celebration of life is pending. If you would like to be notified when services are scheduled, please send names and email addresses to her daughter, Cassandra. Please send condolences or other correspondence to Cassandra Morehouse P.O. Box 1325, Waianae, HI 96792. Elise was a beloved mother, grandmother, sister, aunt, and friend. We love you Mom. Aloha Elise Ann Jones. Rest in Peace and Love. Till we meet again, a Hui Hou.

The family of Elise Ann Jones created this Life Tributes page to make it easy to share your memories.

Send flowers to the Jones family.