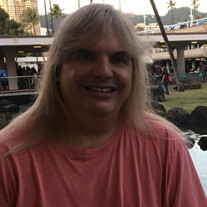 Erich was born on October 24, 1959 in Encino, California. He was predeceased by his beloved and adoring mother, Dixie Lee Hansen, on January 2, 2021, in San Diego, California. He was also predeceased by his father Frederick Bertram Petrie and sister Kathy Hansen Cosic. He is survived by his wonderful stepfather Viggo "Pete" Hansen of San Diego; his sisters Leesa Petrie of San Francisco and Anne Hansen of Pine City, Minnesota; and brothers Alex Hansen of Sausalito, Mark Hansen of Worthington, Ohio, and Kimo Brown of Honolulu. Erich was a kind, funny, sharp, generous and honest man who cared deeply and passionately for those he loved, and he had a great heart for those who experienced heartaches in this life, especially the homeless and abused animals. As a young boy, Erich often rescued wounded or malnourished stray birds and other small animals, patiently nursing them back to health so they could return to live in their natural habitat. And as an adult, he got great joy handing out food to the homeless in Honolulu's parks and, while visiting family, in downtown San Diego. Erich was happiest in darkened venues listening to music. Over his lifetime, he attended hundreds of concerts of all kinds: rock, pop, jazz, country, Christian, Hawaiian, and the Hawai'i Symphony. He saw almost every great act of the last fifty years, from Willie K. to Led Zeppelin. For many years Erich was an acclaimed studio-grip/high-man in Hollywood, a job he loved. He worked on most of the hit TV shows and many blockbuster movies of the 80s. He was also a U.S. Army veteran. Erich's great passions included classic rock music, his motorcycles, his dog Seven, his hometown of Los Angeles (the Dodgers and Lakers both winning titles in 2020, like totally awesome!), his years as a "hot dog" skier, his two-hundred rescued stuffed animals (especially Excited Lovebear), his unique and unforgettable mother Dixie, his best-friend-in-life Kimo, and more than anything his Lord and Savior Jesus Christ, who changed his heart and life in amazing ways. He also had a burning love for Bible prophecy and was an avid student of the Christian scriptures. It is a great comfort that Erich is with the God he so trusted in this life. His favorite verse was Romans 10:9. If you declare with your mouth, “Jesus is Lord,” and believe in your heart that God raised Him from the dead, you will be saved. Erich was very grateful for the extraordinary efforts of the many doctors, nurses, aides, and staff who helped him in his epic 12-year battle with cancer and asked that they be thanked. He also loved his fellow believers at Waikiki Baptist Church and thanked them for their years of prayers. In lieu of gifts or flowers, please make donations to the River of Life Mission in downtown Honolulu or the Hawaiian Humane Society

The family of Erich Todd Petrie created this Life Tributes page to make it easy to share your memories.

Send flowers to the Petrie family.