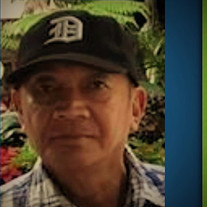 Ernesto “Erning” F. Balaoing, 65, of Ewa Beach passed on to heaven on 31 October 2018. He is survived by his wife, Marilyn, sons, Raymar, Randel and Ranray, grandchildren Ernest Jhames, Rey-mar and Ranniel, brother Pepe (Esther) and sisters Fe (Jose), Linda (Ric) and Annabelle (Gary), and numerous in-laws, uncles, aunts, nephews and nieces. Erning was born and raised in San Felipe, Zambales, Philippines. In 2005, he and his wife and son Ranray, came to Hawaii. His two other children, Raymar and Randel, followed several years later. He was proud to become an American citizen in 2014. Visitation will be held on 16 November 2018, Friday, at the Oahu Mortuary Chapel, 2162 Nuuanu Avenue, Honolulu between 4:00 PM – 8:00 PM Srevice at 5:30pm. Interment will be held in San Felipe, Zambales, Philippines on 25 November 2018.

The family of Ernesto Fulinara Balaoing created this Life Tributes page to make it easy to share your memories.

Send flowers to the Balaoing family.