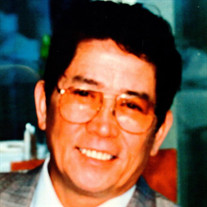 George Crescini Penaflor, 78 years old George “Papi” Penaflor, 78, of Kapolei, Oahu, Hawaii, passed away peacefully on Sunday, September 16th, 2017 at Queens Medical Center. Born on February 6th, 1939 in Cara Moan, Camarines Sur, Philippines, to Makario Penaflor and Teodora Penaflor, he lived his youth in Kinalansan, San Jose, Philippines. He lived his adult life in California (Long Beach, San Diego, San Francisco, and San Jose) and later adult life in Kapolei, Hawaii. George was a kind, patient, and gentle soul who loved his wife, children, grandchildren. He enjoyed gardening, raising his dogs (even an adrift chicken!), and watching his 49ners football team. He joined the USN at the age of 18 years old and moved to the United States. He became a Master Chief in the US Navy in 16 years, touring in a destroyer, USS Buchannan, and the USS Enterprise. He taught English as a second language and commanded a department in the Commissary at Moffit Field in Northern California. He worked as a mail carrier (resisting any promotions) and volunteered and later worked at a local elementary school. His favorite hobbies were: gardening (especially giving away his produce to neighbors), walking his dogs, biking, reading the news, and watching TV (especially nature channels and football). George is survived by his lovely wife, Lucy Naraja Penaflor, and his many sisters and brothers (as well as his many loving sisters-in-laws, brothers-in-law, nieces, nephews, neighbors, and friends). He left behind and was extremely proud of his children: Gerald Penaflor of Kapolei, and Gina Penaflor and her husband Stephen McIntyre of Florida. He especially doted upon his three grandchildren, Emily 19, Nicholas 15, and Thomas 12. The family will receive family and friends on Tuesday, October 10th, 2017 from 9:00 AM until 11:00 AM at St. Jude Catholic Church in Makakilo.

The family of GEORGE CRESINI PENAFLOR created this Life Tributes page to make it easy to share your memories.

Send flowers to the PENAFLOR family.