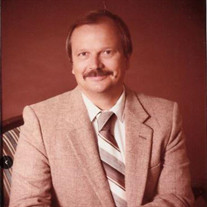 Howard W. Dodds was born in Watertown, New York on April 14th, 1935 the son of Thomas and Eleanor Dodds (Stearns). After living on the east coast, he moved with his family to Southern California along with his two sisters Mary and Judy. While in the Marines he spent a few weeks in Hawaii. He promised himself he would retire there and he did. His entire adult life he had a love affair with Hawaii. He traveled there as often as he could until he was able to make his dream of retiring there happen. It was in his retirement in Hawaii that he met his Hawaiian princess Eleanor (Leilani). Their love affair lasted over 20 years until his death. More than anything, Howard loved his family and he loved doting on his grandchildren. He would travel to watch them compete in sports, to watch them graduate college and watch them get married. Howard loved baseball, with his favorite player being Nolan Ryan. He was a fan of the Angels and the Braves, and he loved taking his family to ballgames. Howard was an excellent golfer. He golfed at Orange Coast College and continued golfing for many years. His favorite golf accomplishments were three holes-in-one, shooting par 72 at the age of seventy and golfing the Robert Trent Jones Trail. Howard loved being the tour guide on all trips, he really enjoyed showing people around and taking them to the best spots. Howard worked for the Federal Government his entire career earning many awards, commendations and the respect and admiration of his fellow workers. Howard touched so many lives and made an impact on many people, especially young people. He was a quiet, strong and consistent force who spoke into many lives without fanfare. Howard was a man of honor and integrity. Howard was a man of faith, his Bible is marked with all of his favorite verses, one of his fondest memories was getting baptized by his son. Howard passed away peacefully at home, surrounded by his loving family on Father’s Day June 21st in Kailua, Hawaii. He is preceded in death by his mother and father and his sister Mary. He is survived by his wife Eleanor; his son Sean Dodds and daughter-in-law Christine along with their two sons Seth and Garrett; his son Ken Weir and his wife Noel Nahale along with his children Brandon and William; his daughter Annie Figueira and her husband David along with their children Daniel, Joshua, John and Kristie; his son Ricky Tongg along with Ricky’s son Makana; his nephew Kurt Parks and Kurt’s wife Jennifer along with their children Ethan, Owen and Kaela; his son Brice Newcomb and Brice’s son Tyler; his cousin Robert Dodds; and his beloved sister Judy Byrd

Howard W. Dodds was born in Watertown, New York on April 14th, 1935 the son of Thomas and Eleanor Dodds (Stearns). After living on the east coast, he moved with his family to Southern California along with his two sisters Mary and Judy. While... View Obituary & Service Information

The family of Howard William Dodds created this Life Tributes page to make it easy to share your memories.

Send flowers to the Dodds family.