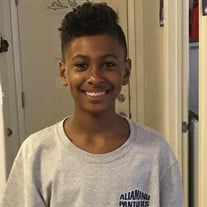 Jaeden Nathaniel Benson was born February 9, 2004 in Virginia Beach, Virginia and transitioned on September 8, 2017 to be with the Lord. He was an 8th grade student at Aliamanu Middle School, where he ran cross country. He also loved rushing the quarterback during flag football season on Joint Base Pearl Harbor-Hickam. He was a member of Island Family Christian Church, where he was an active part of the youth group, and a youth leader in Awana. Very upbeat and funny, he effortlessly made people laugh and smile. He was a selfless servant who had a deep desire to help others. He was loved by many and left a lasting impression on everyone he came into contact with. He loved cell phones, video games, the Baltimore Ravens, singing, and dancing. His greatest aspirations were to become a Navy Chief and design his own clothes under his Poppy Cheecko brand. He is survived by a host of family and friends to include, his parents: Steven H. Benson Jr., Cesshecka M. Benson, and Danyelle N. Benson. His sisters and brother: Kyra A. Williams , Cadence J. Benson, Tristen R. Benson, and Leilani A. Benson. His grandparents: Steven H Benson Sr. (Pop Pop), Un Y. Benson (Nana), Greg Davenport (GDaddy), Kimberly Davenport (Bibby), Cess Matthews (Paw Paw), and Pamela Randel (Grandma). His aunts and uncles: Tim Roderick, Donna Roderick, Tenisha Puckett-Houser, Marques Houser, Adrienne Davenport, and Carletta Jones. His cousins: Alyssa Roderick, Kaitlyn Roderick, Armani Robinson, Caela Jones, Christopher Aguilar-Houser, Azara Houser ,and additional baby girl Houser due in December. His best friend Alizea Mendez (Ally). Dress code for services will be casual attire. Jaeden has a free and fun loving spirit and we would like to pay our respects in a manner that best fits his personality. In lieu of flowers, please bring helium filled balloons with your personal message to Jaeden written on them for a mass release at the conclusion of the services. Family request that Leis be accepted. Services will be held: Fellowship Baptist Church September 19, 2017 5 pm 1298 Rogersville Road Radcliff, KY 40160 ISLAND FAMILY CHRISTIAN CHURCH September 23, 2017 4 pm 3375 Salt Lake Blvd. Honolulu, HI 96706 Tel: (808) 422-7811

Jaeden Nathaniel Benson was born February 9, 2004 in Virginia Beach, Virginia and transitioned on September 8, 2017 to be with the Lord. He was an 8th grade student at Aliamanu Middle School, where he ran cross country. He also loved rushing... View Obituary & Service Information

The family of Jaeden Nathaniel Benson created this Life Tributes page to make it easy to share your memories.

Send flowers to the Benson family.