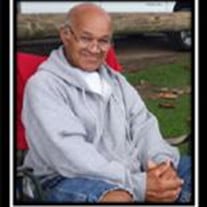 James Rudolph "Rudy" Kealohi, age 83, departed serenely at his home in Kaneohe. He was surrounded by his loved ones. Dad came to know the Lord and has accepted Him as his Lord and Savior. Rudy joined his Heavenly Father, and reunited with his late wife, and son early Wednesday morning, March 5, 2019. Rudy was born on April 13, 1934, at 1423 B Bowers Lane in Honolulu to James Kealohi (a telephone utility foreman) and Margaret Kalima (homemaker). He lived in Kalihi, an area previously known as Damien Tracks. He and his family then relocated to St. Louis Heights and this is where he met the true love of his life. He attended Kalaukaua Intermediate School, then Kaimuki High School. While in high school he played football. He was the Bulldog's running back. Another activity he excelled in and was passionate about was driving fast. Dad loved racing and driving exotic cars. On August 4, 1956, he married Ellynette Harriet Bannister at St. Patrick's Church. Together, they had four sons and two daughters. Rudy was a hard worker. He was a safety inspector for Dynamic Industries. He retired from Site Engineering as a machine operator. A new skill that soon became a hobby was woodworking. Dad enjoyed creating different wooden products from the locally grown trees such as Koa, Mango, Kamani, and Haole Koa to name a few. He crafted beautiful bracelets, other assorted jewelry, book ends, and bowls. When he was not crafting he attended his grandchildren's various sport events, as well as any of their other extracurricular activities. He is survived by his sons, James ("Honeygirl"), Rory (Rochelle), Rodney (Sandy), ("Jackie") widow of Randall, and daughters Millynette (Brad) and MaryElizabeth (Joseph); 18 grandchildren; 19 great grandchildren; and 2 great, great grandchildren. Family, friends, and others whose lives were touched by Rudy is invited to Oahu Cemetery, 2162 Nuuanu Ave, Honolulu, HI 96817, on Saturday, April 13, 2019 from 10-11 AM open viewing, 11-12 PM service, and 12-1 PM. Please join us as we celebrate the life of our dear father.

James Rudolph "Rudy" Kealohi, age 83, departed serenely at his home in Kaneohe. He was surrounded by his loved ones. Dad came to know the Lord and has accepted Him as his Lord and Savior. Rudy joined his Heavenly Father, and reunited with his... View Obituary & Service Information

The family of James Rudolph "Rudy" Kealohi created this Life Tributes page to make it easy to share your memories.

Send flowers to the Kealohi family.