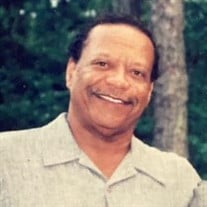 73, of Aiea, passed away peacefully on January 25, 2022. Skeeter was born in the Territory of Hawaii on October 4, 1948. Raised in Aliamanu, Skeeter was a proud graduate of Radford High School, class of 1966. After high school, Skeeter enlisted in the U.S. Army and proudly served his country. When he completed his Army stint, Skeeter was employed by KEMS Electric Motor Company as a warehouseman. Always dedicated and loyal, Skeeter maintained his employment as the company transitioned to HSI Electric and eventually, General Dynamic. At his retirement in 2015, after more than 40 years, he was the Vice-President of Electrical Sales. Skeeter loved people, loved listening to and talking to them. Once he learned their story, he never forgot it. Skeeter never met a stranger; if he met you, you were his friend. The boys he grew up with in Aliamanu became his lifelong friends and chosen family. Co-workers and customers he worked with over his 40+ years in the electrical services industry were referred to by him as his friends. Skeeter conversed with strangers at weddings, baby lu'aus and graduation parties and after talking story for a short time, often realized that he knew their families, and so they were no longer strangers, but also his friends. Among the countless friends he made during his life, he is survived by a loving family; Martha, their daughter, Summer; son-in-law, Juan; granddaughter Lily Lehua Preddy; brothers, Gregory and Michael; sisters, Gail and Pamela; cousins, nieces and nephews. He was preceded in death by his sister Beverly; and parents, James and Dorothy Preddy. A celebration of life service will be held over the summer.

73, of Aiea, passed away peacefully on January 25, 2022. Skeeter was born in the Territory of Hawaii on October 4, 1948. Raised in Aliamanu, Skeeter was a proud graduate of Radford High School, class of 1966. After high school, Skeeter enlisted... View Obituary & Service Information

The family of James D. Preddy Jr. created this Life Tributes page to make it easy to share your memories.

Send flowers to the Preddy family.