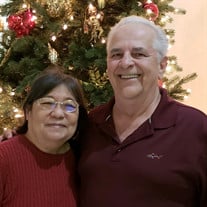 In the early morning hours of Friday, October 9, 2020 Joanne Laferriere quietly took her last breath, leaving the arms of her loving husband of 53 years, and entering the eternal embrace of her Heavenly Father Jesus Christ. Born in Honolulu Hawaii in 1947, Joanne Chang was the third child of Joe and Ellen Chang. Her formative years were spent with her older brothers Rodney (d), David, and younger sister Debbie (d) fishing and playing on the shorelines of Wake Island where her father worked for the FAA. Upon returning to Hawaii, the family settled in 'Aina Haina, where Joanne attended Kalani High School class of '65. After graduation, Joanne worked at the Orange Julius in Waikiki where she would one day meet a young sailor from Rhode Island named Paul. The two were married and the adventure began shortly after. This island girl found herself living on the East Coast for a short time, but the tropic breezes beckoned the young couple and they found themselves returning to Hawaii where they would begin their family, welcoming son Daniel in 1970 and daughter Tracy in 1976 spending time on the islands of Oahu and Maui A true Proverbs 31 woman, Joanne found resourceful ways to contribute to the family income. She worked for a period at JC Penny, did home child care, cleaned private condos, and even did laundry for the neighborhood bachelors. Though the work was hard at times, Joanne never complained and would often listen to her favorite worship songs or her collection of 45s to pass the time. But her most rewarding career was as an educator. Joanne earned her Master's degree in early education, but enjoyed the variety that substitute teaching offered and opted for that instead of a permanent teaching position. Joanne found her greatest fulfillment in helping kids discover their abilities. From preschoolers to middle schoolers, she had a firm yet loving way of encouraging kids to believe in themselves and stretch beyond their limitations. She was known in multiple schools as the "super substitute" and teachers would plan their maternity leave around her availability because they didn't trust anyone else to care for their students. To this day, former students now grown with children of their own recognize their time with Mrs L as a turning point which kept them from quitting school. There really is no way to measure the impact she had on the lives of her students. Joanne's love for teaching and inspiring others carried over into her personal life as well. Along side her husband, she spent many years teaching children's church and AWANAs bible school at her church. More than anything she wanted those children to know just how much Jesus loves them. And though she prayed for those children often, she prayed most fervently for her own four grandchildren Bryeana, Behlye, Darcy and Dylan. Joanne's ability to encourage and inspire others wasn't limited to kids. She was a well respected mentor to countless adults as well, speaking life into the hearts of the men and women in her church small groups, and sharing Jesus with anyone who would listen, even praying for each nurse and lab technician that could spare a moment. Although Joanne was always gentle and soft-spoken, her words were full of power and her prayers were always heard. In 2012 Joanne suffered a serious heart attack, causing her family to pray and asked the Lord for just a little more time. He graciously gifted them with eight more amazing years filled with memories and love. She will be missed by friends and family from across the globe, and though she is no longer physically with us, the legacy of her love and the fruits of her labor will live on forever.

In the early morning hours of Friday, October 9, 2020 Joanne Laferriere quietly took her last breath, leaving the arms of her loving husband of 53 years, and entering the eternal embrace of her Heavenly Father Jesus Christ. Born in Honolulu... View Obituary & Service Information

The family of Joanne Ngit-Kwai Laferriere created this Life Tributes page to make it easy to share your memories.

Send flowers to the Laferriere family.