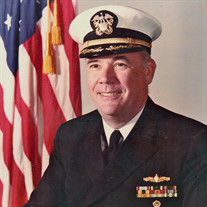 Cdr. John (Jack) Miller (Ret.) died at his home in Kailua, Hawaii on June 13, 2021, after a challenging battle with esophageal cancer. He is survived by his loving wife of twenty-five years, Carita Miller, daughter Laurie Miller Laychak (Jim Chareq), son John Miller (David Adamo), step-daughter Maile Green, grandson Zach Laychak, granddaughter Jennifer Laychak, sister Dorothy Jean Paredes, nephew Rob Paredes, and nieces Sue Fernandez and Nancy Paredes. He was greeted in heaven by friends and family members, including his son-in-law Dave Laychak. Jack loved life. He always lit up a room with his cheerful demeanor. He was born in the small town of Port Byron, NY. Jack loved to share stories from his youth and was always talking about the geneology of the family as it dated back to the founder of Port Byron who fought in the Revolutionary War. One especially fond memory was when Jack, as an Eagle Scout, attended a World Jamboree in Austria. Jack graduated from Syracuse University where he played the trombone in the band and was the President of Sigma Phi Epsilon fraternity. Upon graduation he was commissioned as an officer in the US Navy. While in the Navy, Jack obtained a Master’s Degree in International Relations from the University of Southern California. He also attended Stetson College of Law. Jack was a proud American who served our country as a Naval Officer for twenty-seven years. During that time he “saw the world.” He spent eleven years in various positions as a line officer aboard the USS Yosemite, USS Greenwood, USS Saline County, USS Fred T. Berry, and the USS Perkins. He also served on shore duty in Saigon during the Vietnam War. Later his postings took him and his family (wife Gigi and their children, Laurie and John), to several countries. Jack was a Logistics Officer on the Staff of the US Naval Forces Europe in London working within the NATO region for four years. He was then an Operations Officer on the Middle East Force aboard the USS LaSalle in Bahrain for two years. Following Bahrain, he served as a Staff Officer for the Pacific Fleet in Hawaii for five years. Jack’s final assignment was as the Defense Attache at the American Embassy in Sri Lanka for four years. He was responsible to the Ambassador, Secretary of Defense, and Director of the Defense Intelligence Agency. Jack’s decorations include: Meritorious Service Medal, Navy Commendation Medal (Combat “V”), Sea Service Deployment Ribbon, Vietnam Service Medal, Armed Forces Reserve Medal, National Defense Service Medal, RVN Campaign Medal, Navy Expeditionary Medal, Combat Action Ribbon, and the Navy Unit Commendation among others. After retirement from the Navy, Jack returned to his house in Hawaii and practiced real estate. Concurrently he became an avid bridge player at the Kaneohe Yacht Club where he met his second wife, Carita. Jack and Carita shared much joy and many adventures during the second half of his life. They enjoyed cruises, domestic and international travel, and even made a trip driving across the U.S. They were known for hosting lively parties at their house. Jack had a magnetic personality that endeared him to his many friends and neighbors. He was often asked to be the master of ceremonies for functions. Jack served in various positions within many local organizations. He became a Duplicate Bridge Silver Life Master and was a District Board Member for the American Contract Bridge League (ACBL). He also remained active with the military community through the Military Officers’ Association of America (MOAA) where he served as President, among other positions. He was a Trustee of the Kalama Beach Club and contributed in various roles as a member of the Sons of the American Revolution (SAR). One of his favorite “organizations” was the ROMEO Club (Retired Old Men Eating Out)! Jack treasured his family and his friends. He always saw the good in others and looked at the bright side of life. He loved food, drinks, songs, and limericks. His eighty-seven years on earth were well lived! We will miss him dearly. May you have fair winds and following seas, Jack.

The family of Cdr. John "Jack" Laurence Miller USN,(Ret.) created this Life Tributes page to make it easy to share your memories.

Send flowers to the Miller family.