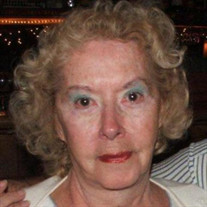 Mrs. Katherin Guerin Hagen, aged 99, passed peacefully into heaven in her home on December 1, 2020 surrounded by family members. She will be dearly missed. A long time resident of Kailua, Hawaii since 1954, Katherin is survived by her five children - Katherin, Alfred (Fred), Helene, John and Elizabeth - 12 grandchildren and 13 great grandchildren. Katherin was born in 1921 in Colon, Panama to George and Kate Guerin who were employees of a US engineering firm engaged in the building of the Panama Canal. Orphaned when less than a year old, Katherin was raised by relatives in Memphis, TN. Katherin was married to Alfred C. Hagen Jr., a resident of Oahu who predeceased her in 1989, after meeting in San Francisco during WWII where Alfred was stationed as a Lieutenant in the US Navy Reserves. As a stay-at-home mom raising five children, Katherin became a talented cook, taught herself to sew, wallpapered bedrooms, and painted ceilings. She was also a cub scout den mother, loved to play bridge, visit with her neighborhood friends, and was an avid reader. After her children were raised, Katherin worked in the accounting offices of St. Francis Hospital and, later, Queens Medical Center. Besides her fierce devotion to her children, grandchildren and great grandchildren, Katherin’s interests were quite varied ranging from international affairs, important political events, and opera especially Jose Carreras of the Three Tenors. She seemed to be always collecting memorabilia whether it be of Princess Diana, quarters of the 50 states, educational comics all with the intent to leave them to her children or grandchildren. A family memorial service will be held in the very near future.

Mrs. Katherin Guerin Hagen, aged 99, passed peacefully into heaven in her home on December 1, 2020 surrounded by family members. She will be dearly missed. A long time resident of Kailua, Hawaii since 1954, Katherin is survived by her five... View Obituary & Service Information

The family of Katherin Guerin Hagen created this Life Tributes page to make it easy to share your memories.

Send flowers to the Hagen family.