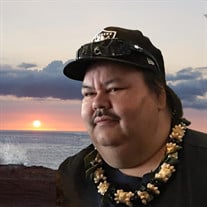 Kealoha Nahoa Guerrero of Makaha, Hawaii left this world on September 5, 2021 at the age of 55. He was born shortly after his parents moved the family from Hawaii to California. Nahoa was the youngest of five children born to Margery Ululani Guerrero and Douglas Hardesty Guerrero, Sr on June 7, 1966 in Oakland, CA. At a very young age Nahoa was immersed in his Hawaiian culture through his parents, kupuna and other relatives on the mainland as well as from the frequent trips he took to Hawaii to visit ohana that lived in the islands. He lived in California for about 30 years before relocating to Hawaii, which was home to him. He worked many years for furniture distribution/assembly companies both in California and Hawaii at commercial and residential properties. Nahoa was very friendly and outgoing and was well liked by all who met him. He loved his family and friends and anything “Goofy”, as in Disney. He loved spending time with his family and friends, and enjoyed outings, attending gatherings and going to the beach. He was an excellent cook and could cook just about anything, but was most famous for his bbq ribs and homemade bbq sauce. He catered with his sister for many years in the San Francisco Bay Area and when he moved to Hawaii, he was sought out for his cooking skills by family and friends near and far. He resided with his mother for the past ten years taking care of one another. Nahoa went to heaven peacefully in his sleep. He is survived by his loving mother, Margery Ululani Kidder, of Makaha, HI, his late father, Douglas Hardesty Guerrero, Sr. (Dutchy), his siblings, Keohiokalani Guerrero Council of W. Sacramento, CA, Ululani Hardesty Smith (Michael) of Newman, CA, Uilani Kuuipo Tacgere (Richard) of Waianae, HI, Douglas Hardesty Guerrero, Jr. (Tammy) of Makakilo, HI and Melody Namele Uhlich (Joey) of Livermore, CA. He is also survived by his Godson, Ben Martinez, of Hayward, CA. Nahoa also leaves behind many nieces, nephews, cousins, aunts, uncles and dear lifelong friends. Nahoa was and is loved and missed tremendously. His Aloha spirit will live in the hearts of his family and friends forever. A memorial service will be held at a later date.

Kealoha Nahoa Guerrero of Makaha, Hawaii left this world on September 5, 2021 at the age of 55. He was born shortly after his parents moved the family from Hawaii to California. Nahoa was the youngest of five children born to Margery Ululani... View Obituary & Service Information

The family of Kealoha Nahoa Guerrero created this Life Tributes page to make it easy to share your memories.

Send flowers to the Guerrero family.