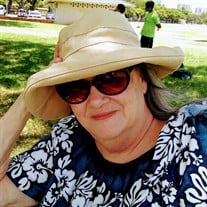 Linda Lou (Livesay) Tauotaha, 69, was born in Natchez, Mississippi on 07/22/1948 to Jean McVoy (Wheeler) and Leon Fletcher Livesay, Jr. She was raised in Jarratt, Virginia, and moved to Honolulu, Hawaiʻi in her early twenties where she remained the majority of her life. She enjoyed living in Tahiti for two years in the late 1970’s where she was married and conceived her first child. After moving back to Hawaiʻi she began a thirty plus year career as a family law paralegal serving countless families and individuals in the best and worst situations of family law: adoptions and divorces. She worked at a number of law firms during that time but two of her dearest friends and employers were Paul A. Lynch and Sheila Vierra. Linda also spent several years working at the Domestic Violence Clearinghouse, offering her talents and compassion once again in the service of the women and children victims of domestic violence. Her years of immense dedication to the field of family law, although well known and respected throughout the legal community, pale in comparison to her marvels as a single mother. Her life was for her children, and eventually her grandchildren. Her personal sacrifices and resourcefulness to stretch a dollar afforded private schools, year round sports, and every opportunity for positive experiences for her children and grandchildren. Mirroring her philosophy in life, her mantra to her children before every sporting event was: "Try hard, do your best, never give up." In her younger years she enjoyed playing basketball and other sports, even against the boys. In her later years she enjoyed watching college basketball and would not be distracted during any UH Mānoa Volleyball broadcasts. As a happily retired grandmother her greatest joy was providing for and spending time with her grandchildren. Despite decades of physical pain from an onslaught of health challenges, she remained steadfast in her service to her family, her clients, and her community. Her mind was sharp, her courage ran deep, her faith in God is why she lived such an impactful life of service here on this Earth and why she now lives with Him in Heaven. Linda Lou passed away peacefully at her home in Honolulu on December, 21, 2017. She is survived and severely missed by her son, Maui, daughter, Tatiana, granddaughter, Vaiana, grandson, Kaikoa, and brother, Woody. Celebration of Life will be held at Kāneʻohe Congregational Church on Saturday, February 10, 2018; visitation to begin at 9:00am, service at 10:30am. Contact [email protected] or call (808) 389-6220 for more info.

Linda Lou (Livesay) Tauotaha, 69, was born in Natchez, Mississippi on 07/22/1948 to Jean McVoy (Wheeler) and Leon Fletcher Livesay, Jr. She was raised in Jarratt, Virginia, and moved to Honolulu, Hawai&#699;i in her early twenties where she... View Obituary & Service Information

The family of Linda Lou Tauotaha created this Life Tributes page to make it easy to share your memories.

Send flowers to the Tauotaha family.