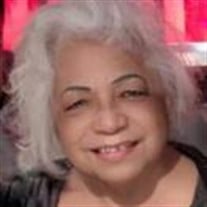 Loretta Marie Leilani Cabebe McCune, 80, of Honolulu Hawaii, passed away on February 26, 2021. She was a beloved mother, grandmother, great grandmother, sister, aunt, cousin, loving wife, and friend who will surely be missed by all of those who knew her. Loretta, affectionately known as “Lori”, was born on October 16, 1940 in Wailuku, Maui. She was a graduate of Baldwin High School, and later attended Honolulu Business College, where she earned her associate degree in Business. Loretta, moved to California where she resided for 31 years before returning to Honolulu in 2019. Loretta worked as a cashier in the Commissary at Camp Pendleton, CA. She later transferred to the Naval Hospital at Camp Pendleton working as a medical clerk. She then transferred to the VA Hospital in Long beach, CA, and retired in 2013 as a medical clerk with the Department of Defense. Loretta made her way back home to Hawaii to spend quality time with her children, grandchildren, and great grandchildren. She was a strong energetic woman who loved life. She would always be the one who listened and gave good advice to help you out. Although Loretta spent many years away from home (Hawaii), she was always proud to be from Hawaii. She would say that the people from Hawaii are so nice to each other and everything is about family. As Loretta takes the wonderful memories with her to Heaven, just know that she loved each and every one of you and that she will forever remain in our hearts. As an expression of sympathy, memorial contributions may be sent to: Stella Cabebe 5080 Likini St, Apt 1216 Honolulu, Hawaii 96818 [email protected]

Loretta Marie Leilani Cabebe McCune, 80, of Honolulu Hawaii, passed away on February 26, 2021. She was a beloved mother, grandmother, great grandmother, sister, aunt, cousin, loving wife, and friend who will surely be missed by all of those... View Obituary & Service Information

The family of Loretta Marie Leilani Cabebe McCune created this Life Tributes page to make it easy to share your memories.