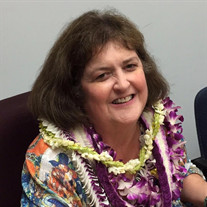 Lori was born in Salt Lake City, Utah, July 25, 1956. She grew up in the nearby mountain mining town of Park City where she attended Marsac Elementary School and Park City High School. She loved to bike ride with her sister Jackie and cousin Jan in the summer and ski all winter. She was an accomplished classical pianist, taking part and winning recital competitions, and was a strong young sister in the LDS faith. After graduating high school in 1974 among the top of her class, she attended Brigham Young University in Provo, Utah. While there, she met and married her husband, Clifford Morden, August 5, 1978. After Cliff completed his Masters degree, they embarked on an adventure to live in Texas where he pursued his PhD degree in 1980. While there, Lori held several positions at Texas A&M University and learned how to use and apply the burgeoning technology of personal computers, something that was to define her career. Lori had two children while living in Texas, Mica (1981) and Matthew (1982). In 1989, they said goodbye to Texas and moved their family to Bloomington, Indiana, where Cliff took a post-doctoral position at Indiana University. While there, she gave birth to their son Dylan (1991). She again held positions with firms where her developed interest in computers allowed her to progress professionally. In January 1992, Lori and Cliff moved to Honolulu, Hawaii where Cliff took a position at the University of Hawaii. She held positions at Carlsmith Ball Law Firm and for 17 years with Hawaiian Cement where she was the manager of all computerization and communications for offices across the State of Hawaii until she retired in 2015 and served on their corporate Women’s Advisory Board from 2003-2005. In 2008, Lori was diagnosed with Multiple Myeloma, a blood-related cancer that affects bone fragility. She devoted herself to beating the disease and learned all she could about causes, symptoms, and treatments. After 9½ years, radiation, and five different chemotherapy treatments, her body could no longer fight off the disease and it took her from us on March 12, 2018. Lori was a devoted wife, mother, and good and caring friend to many. She always kept her faith in God and served in many leadership and teaching positions within the LDS church. Her belief in God was a key element in the raising of her three children and selflessly serving those around her. She is survived by her husband Cliff, daughter Mica Elizalde (m. Eric Elizalde, 2011), sons Matthew (m. Brooke Radar, 2012) and Dylan (m. Paola Rudecindo Fajardo, 2016), and grandchildren Ravin (15), Dayton (11), Kiffyn (9) and Olive (4). She is also survived by her parents, Kurt and Noreen Nelson, sister Jacqueline Nelson, nieces Ashlee Ridgway and Brooke Sowards, and nephew Ryan Pitt. Services will be held Saturday, March 24 at the Mililani, LDS chapel (95-1039 Meheula Parkway) with viewing 9:00 to 11:00 and service at 11:30, and in Park City, Utah on March 29 where she will be interred.

Lori was born in Salt Lake City, Utah, July 25, 1956. She grew up in the nearby mountain mining town of Park City where she attended Marsac Elementary School and Park City High School. She loved to bike ride with her sister Jackie and cousin... View Obituary & Service Information

The family of Lori Nelson Morden created this Life Tributes page to make it easy to share your memories.

Send flowers to the Morden family.