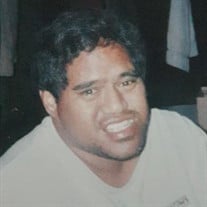 Louis “Sonny” Kamaka Kaio, III was born on September 12th, 1956 to Louis, Jr. and Mary Niau Ho’opai. One of the very last Pure Hawaiians to grace this earth has turned in his final one-way bus pass to heaven. Preceded in death by his parent’s, sister’s Laverne Coffey, Dianalyn “Pua” Kaio, Juliana “Julie” Sklar, and Ramona “Mona” Rosa. The only surviving son, raised alongside his nine sisters, you could imagine that life was pretty interesting for the only boy in the family. Affectionately known as “Braddah or Sonny Boy” by his parents and sisters, “Uncle Sonny” to his countless nieces and nephews and “Louie” or “Sonny” to those who were lucky enough to call him a friend. Born and raised in Waimanalo, he attended Kainalu and Waimanalo Elementary and Intermediate school, then went on to graduate as a Surfrider from Kailua High School in 1975. Suffering from seizures as a toddler, he never let the disability change his outlook on life, always smiling and really fast on his feet. He built up his running skills from being a bit kolohe and needing a head start to run-away from “the man” and “the lady”, his mom and dad. He received work skills support from Lanakila Rehabilitation and Goodwill Industries as a young adult, where it provided him the opportunity to secure a dishwasher position at John Dominis Restaurant. He spent over 20 years there and built lifelong friendships before retiring in the late 1990’s. A big mahalo to his former manager’s and co-workers for his birthday celebration that he would never let us forget and held on to those pictures throughout the decades that followed. As the only brother in a household filled with wahine’s, it was hard getting a word in most conversations. However, he made sure, you, were never left out or forgotten. He was our own “Hawaiian Rain Man.” He could remember everyone’s birthday and that would be one of the questions he would ask you when you met. If you were lucky enough and he had somewhere along the way gotten your phone number, you were guaranteed a call and a sweet but short birthday wish, even if everyone else around you forgot, Sonny would always remember your special day. When he spoke, he had a low gruffy voice and would always ask us, “Eh Boy”, “Eh bebeh”, “Eh sister, how you?”, with a little smirk and squint of the eyes and his trademark tongue hanging to the side of his mouth. He is known by his family for always being so forgiving, even after an argument, he always said, “Sorry bebeh” or “Sorry sister,” “I’m sorry”, and you couldn’t stay mad at him and would quickly forget what you were arguing about. His favorite past times included making his daily, rotating phone calls to all his friends, reading his favorite “magazine articles”, listening to Gabby or any old Hawaiian music humming along with his eyes closed and playing his “air ukulele”, hanging out on Kalanianaole Highway in Waimanalo in front of the family house checking on all the cars that came in and out of town, catching his favorite #57 TheBus where he would sit on the first seat across of the bus driver to talk story as he headed to Ala Moana Center. He would hangout by the Crack Seed shop close to McDonald’s, talking story with the regulars. This routine of getting ready at home, getting out of the house and just being with people is what he enjoyed most, rain or shine. He also hung out at Hotel Street by the main bus stop near the old Woolworth. Sonny was not shy and would say “hi” and strike up a conversation with complete strangers. He was also TheBus’ best unpaid employee, although they didn’t know it at the time, he provided free bus service information to anyone standing near him, providing new riders or tourists with the best bus to take to their destination and the next time it would be arriving. He made so many countless friends this way and really enjoyed helping people. A true, die-hard San Francisco 49er fan until the very end (except for when they lost, a running family joke). On Sunday, February 27th, unbeknownst to him and us, he would make his way to heaven wearing his favorite 49er shirt as he peacefully passed away in his sleep. Louis is survived by his beloved sister’s Clarice (John) Lucero, Lucy Kaio, Julie-Marie “Lani” (Steve) Hartsock, Susie “Sue” Kaio, Mary Kaio, Chanda “Anela” (Sol) Keawe, 13 nieces and nephews, and 24 grandnieces and nephews. Braddah, Louis, Uncle Sonny, Louie, whatever name you knew him by, always loved seeing his friends and family. We would like to invite those who knew him to please join us for a Celebration of Life on Saturday, March 19th from 12 noon - 3pm at 41-914 Kalaniana’ole Highway in Waimanalo. Lunch will be served at 12 noon and fellowship and service to start at 1pm.

Louis &#8220;Sonny&#8221; Kamaka Kaio, III was born on September 12th, 1956 to Louis, Jr. and Mary Niau Ho&#8217;opai. One of the very last Pure Hawaiians to grace this earth has turned in his final one-way bus pass to heaven. Preceded in death... View Obituary & Service Information

The family of Louis Kamaka Kaio III created this Life Tributes page to make it easy to share your memories.

Send flowers to the Kaio family.