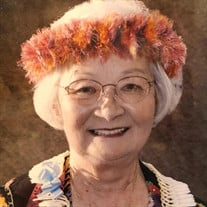 We regretfully announce the passing of Marian Tsuneko Takagi, 93, on February 2, 2021 in Honolulu. Marian was born in Hala’ula, Kohala on Hawai’I Island. Her family was interned at Camp Jerome, Arkansas and briefly at Gila, Arizona during World War II. She graduated from Denson High School in camp and attended the Minneapolis Cosmetology School where she obtained her Cosmetologist Certificate. After the war ended, the family returned to Hawaii. She worked various jobs, including the family’s saimin stand in Honolulu and as finance clerk at Finance Factors. In 1951 she married Takaki “Slim” Nakata who founded Pacific Brokerage, Ltd., a wholesaler of toys and fireworks. She was active as an auxiliary member of the Japanese Junior Chamber of Commerce and at Olivet Baptist Church. After her husband passed away in 1971, she took over running Pacific Brokerage until her retirement in 1975 when she married Douglas J. Takagi, a successful insurance salesman and a member of the Million Dollar Round Table. Due to his successes in insurance and securities, she enjoyed traveling widely with Douglas around the world. They joined First Presbyterian Church in Honolulu and were active members until their deaths. Marian enjoyed cooking, listening to music and attending concerts, especially when her grandchildren performed in the Hawaii Youth Opera Chorus, watching Japanese and Korean dramas. She loved organizing and took care of her extended family, earning the nickname, “the General” and often regaled them with stories from their families’ history. She lived in Hilo from 2013 to 2017 and before moving back to Honolulu. Marian is preceded in death by both of her husbands and two sons. She is survived by two of her sisters; and her brother; three daughters; three sons; ten grandchildren and seven great-grandchildren. Due to current restrictions, a private memorial service will be held for the family on April 3, 2021.

We regretfully announce the passing of Marian Tsuneko Takagi, 93, on February 2, 2021 in Honolulu. Marian was born in Hala&#8217;ula, Kohala on Hawai&#8217;I Island. Her family was interned at Camp Jerome, Arkansas and briefly at Gila, Arizona... View Obituary & Service Information

The family of Marian Tsuneko Takagi created this Life Tributes page to make it easy to share your memories.

We regretfully announce the passing of Marian Tsuneko Takagi,...

Send flowers to the Takagi family.