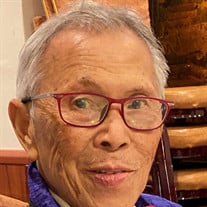 Obituary for Marvin Jung Gunn Young By Sandra J Young, January 21, 2020 Marvin “Gunny” Young was born on May 3, 1930 in Honolulu, Hawaii. He graduated from McKinley with a high school academic diploma. He was good at doing mathematics. He was extraordinary in many ways. He was born with brown eyes but as he got older, his eyes became blue. At a very young age, he was identified as gifted in music, being able to play 7 instruments well without having to take a single lesson. He played ukulele, piano, organ, accordion, guitar, trumpet, and clarinet. He could tap dance and hula and he had a beautiful voice with a wide range. He could even sing falsetto, and was especially adept in singing the female part of the Hawaiian Wedding Song duet. Gunny, 89, passed away peacefully at his home in Honolulu on January 1, 2020 with his sisters at his side. Gunny began performing with his older brother Calvin “Inny” Young at the age of six. He played the straight man while Inny did the talking and singing. When Inny was drafted into the US Army in 1951, Gunny enlisted to be with his best friend and brother, Inny. Together they were selected to be in the Special Services of the USO - Army and were stationed in Tokyo, Japan in July 1951 entertaining the troupes during the Korean Conflict. He and Inny performed with Bob Hope and his tour group which entertained troupes on Korean and Japanese bases. At that time, he met and performed with many famous celebrities of the time like Bing Crosby, Dorothy Lamour, and Mickey Rooney. After the war, Ting (Inny) and Tung (Gunny) began performing professionally in Las Vegas and around the country as a song and dance team. Sylvia, his younger sister joined them in performing for a short time. Inny and Gunny were able to see much of the USA in this fashion until about 1958 when they retired as a performing team. In 1969, Gunny started working for United Airlines at LAX in the Food Services Department. He earned Perfect Attendances awards for all of the 18 years that he worked there in Los Angeles! In 1984, Gunny retired and moved back to Hawaii. Since that time, Gunny was able to bowl in several bowling leagues, once bowling a 298 score out of 300 in a tournament. He loved fishing and flew to many places to fish all over the world. He enjoyed his United travel benefits and traveled to many countries of the world with family members and friends Gunny Young was a very quiet, kind, and thoughtful person. He never swore or talked badly about anyone. He was always willing to drive anyone who needed a ride, even at 5:00AM in the morning to go to the airport. He seldom complained about anything even in the last days of his life. Cancer took his bodily form from us but he will long live in our memories. Marvin Young is survived by his sisters, Sylvia (Ronald) Young and Sandra Young of Honolulu, and niece, Mei-Lani Young, and nephew, Andrew Young, of Minnesota, and many relatives and good friends. He will be missed and remembered by all who knew him. Private services will take place at the National Cemetery of the Pacific (Punchbowl) on February 12, 2020 at 10:30AM followed by a Celebration of his Life Luncheon at the Maple Garden Chinese Restaurant following the service.

Obituary for Marvin Jung Gunn Young By Sandra J Young, January 21, 2020 Marvin &#8220;Gunny&#8221; Young was born on May 3, 1930 in Honolulu, Hawaii. He graduated from McKinley with a high school academic diploma. He was good at doing mathematics.... View Obituary & Service Information

The family of Marvin Jung Gunn Young created this Life Tributes page to make it easy to share your memories.

Send flowers to the Young family.