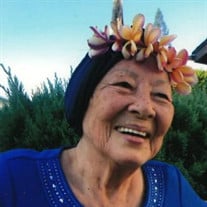 Masako Cateel peacefully passed away at the age of 90, on October 25, 2021, the day the love of her life, William Cateel, celebrated his Heavenly birthday. Before her battle with vascular dementia, Masako dedicated her life to being a loyal wife, mother, sister, aunt and grandmother. Born in Tokyo, Japan on February 25, 1931, she was one of six children, who lost her father at age 9, and her mother at age 16. In 1960, she married an Air Force soldier who led her on a journey as a military homemaker and mother making it a priority to learn English as well as taking culinary classes. Billy and Masako volunteered at an orphanage for blind children, participated regularly in a bowling league as well as enjoyed exploring various parts of Japan before the Air Force sent them to Hawaii followed by Oklahoma, Guam, and back to Hawaii where her husband retired. As a sales clerk at MJR (located in the Honolulu International Airport) for over twenty years, her natural charisma attracted customers and she beamed with pride receiving praise for her gift to connect with anyone who crossed her path. One of her missions in life was to spoil her only child and two granddaughters. Scrubbing their shoes with a toothbrush, sending them home with containers filled with their favorite meals and taking them on weekly shopping sprees are treasured memories her family will never forget. As a grandma, she celebrated every occasion (Easter, Girls Day, Valentine’s Day, birthdays, Christmas and New Year’s) with precious cards in envelopes decorated with stickers including a generous monetary gift. Sleepovers at grandma’s and papa’s often included going to their favorite restaurants, being tightly tucked in bed after enjoying delectable desserts followed by a homemade breakfast (or a visit to Zippy’s) plus more shopping the following day. She often offered to pay half of any expense involving her granddaughters’ extracurricular activities: ballet, karate, gymnastics, and ice skating. Her goal in life was to ensure every problem was solved, hidden items were found or replaced and unlimited hugs/kisses were dispensed. She is survived by her daughter, Karen, son-in-law Thomas, and granddaughters, Sabrina and Chelsea. Her vivacious personality made her a favorite auntie who often carried out her tradition of bringing her famous miso soup and sushi whenever she visited relatives. Making others laugh with her silly sense of humor caused her to be a love able social butterfly at family gatherings. Masako will be remembered for her infectious smile, enthusiasm and genuine optimism. No longer living in this world, but she will always reside in our hearts. Services on November 26, 2021 from 9:00am-1:00pm at Oahu Cemetery Chapel. Inurnment services will be held on December 3, 2021 at The Hawaii State Veterans Cemetery in Kaneohe at 11:00am.

Masako Cateel peacefully passed away at the age of 90, on October 25, 2021, the day the love of her life, William Cateel, celebrated his Heavenly birthday. Before her battle with vascular dementia, Masako dedicated her life to being a loyal... View Obituary & Service Information

The family of Masako Cateel created this Life Tributes page to make it easy to share your memories.

Masako Cateel peacefully passed away at the age of 90, on October...

Send flowers to the Cateel family.