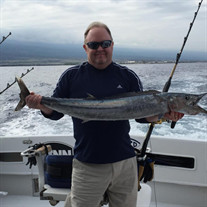 Michael D. Graham, originally from Forestville, CA has gone fishing with the Master of the Sea on June 3, 2020 in Hawai’i. He had been living his best life in Kailua-Kona, Hawai’i with wife Agnes and daughter Marcie (Oahu). Mike was born March 7, 1966 to the late Raymond Veronda (biological father), Leonard (adopted father) and Patricia (biological mother) Graham. He graduated from El Molino High School. After high school, he served in the US Marine Corps and Air Force and traveled the world. In 1993, Mike began his career as a nurse with Kaiser Permanente. He loved his job and loved mentoring others. Over the course of the next 26 years, his passion for his work grew and his coworkers became family. Outside of work, Mike enjoys spending time with family and friends. He loved the outdoors and activities that came with it like camping, skydiving, swimming, and most of all fishing. When friends and family came to visit Hawai’i, he often played the role of tour guide and always had a list of places to visit and things to do on the island. Mike also loved football, not just watching it, but also playing Fantasy Football with his friends. He had a great zest for knowledge, always looking to learn new things and passing what he learned onto others. Mike is survived by his wife Agnes, daughter Marcie, brother Bill and wife Luna, brother David and wife Justine, brother Jerry, and nephews and nieces Cody, Ezra, Sherley, Ashley, and Harley. Mike is also survived by his in-laws Lourdes, Rowena, Teri, Pete, Belle, Dani, Azon, Rico, Vangie, Alil, and Marco. He is also survived by his furballs Stink, Lilo and Toby. There will be no formal services at this time. A celebration of life will be held at a future date when friends and family can safely gather together in his memory. Please feel free to share your fond memories of Mike. Mahalo nui loa

Michael D. Graham, originally from Forestville, CA has gone fishing with the Master of the Sea on June 3, 2020 in Hawai&#8217;i. He had been living his best life in Kailua-Kona, Hawai&#8217;i with wife Agnes and daughter Marcie (Oahu). Mike... View Obituary & Service Information

The family of Michael David Graham created this Life Tributes page to make it easy to share your memories.

Send flowers to the Graham family.