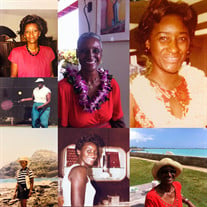 Naomi Vera Ford Hill was born in Greenwood, Mississippi as the fourth of six children from the union of James Matthew Ford, Sr. and Mary Elizabeth Early Ford. The family headed north to Chicago in the early 1940's where Naomi enjoyed city life with her immediate family of four sisters and one brother. While living in Chicago, she attended Farren Elementary School and later graduated from Englewood High School with the Class of 1957. After graduation, Naomi went on to attend the University of Illinois at the Chicago Navy Pier campus. She was only able to attend one semester due to financial constraints. Never one to be stopped, Naomi enlisted in the U.S. Navy in 1959. During her second tour of duty, she was stationed at Quonset Point Naval Air Station in Rhode Island. It was there that Naomi found her two longest lasting loves -- the game of tennis and the love of James Andrew Hill. Jimmy, who had also enlisted in the U.S. Navy, told her that he wouldn’t marry a woman who was also in the military. With sights on her married life ahead, Naomi was honorably discharged in April 1965. She and James went on to marry in January 1966. Naomi then moved with her two great loves all the way across the country to Honolulu, Hawaii where Jimmy had been transferred. Their only child, Jo Anna Marie Hill was born in September of 1966. Jo Anna later grew to share her Mom's two greatest loves, becoming a Daddy's girl who loved tennis. The family enjoyed the island life, beach, tennis, golf, and more tennis. Naomi worked at Pacific Division, Naval Facilities Engineering Command in the Housing Department. The “can do” spirit sent her back to college while she also worked full time, and took care of her family. She graduated with a B.S. in Business Management from Chaminade University in 1976. The Hill Family later moved to Northern Virginia in 1980, for her new job, as Jimmy had retired from the U.S. Navy by then. While in Virginia, the family suffered the devastating loss of Jimmy who passed away in 1981 at the age of 47. Never being one to stand idle, Naomi soldiered through making her way back to Hawaii in 1984. While residing in Hawaii, Naomi retired as a Housing Management Specialist with 39 years of Federal Civil Service employment in January 2000. Naomi was an adventurous woman who enjoyed traveling abroad for both business and pleasure - most times with her tennis racket - but always with an infectious smile and zeal for life. While not on the tennis court, her time was spent with her love of books, going to the movies, volunteering, bowling, bingo and living her life to the fullest. Naomi is remembered for her laughter, beautiful smile, and warm, generous heart. Naomi passed away on 18 September 2019. She was preceded in death by her parents, her husband, her sisters Fannie Wright (Jack, deceased) and Bertha Love (George) and her brother James Ford, Jr. (Ada, deceased) Naomi leaves to celebrate her life: daughter Jo Anna Hill, sisters Lucinda Tyler (Richard) and Jacqueline Pollard (Willie, deceased) stepmother Minnie Ford, and a host of cousins, nieces, and nephews -- and of course her dear lifelong friends who were always there with love and support. As many of you know, tennis and reading brought Naomi great pleasure. If you would like to make a donation in her memory, please consider: •XS Tennis Foundation xstennis.org/donate at step 4, please add “In Memory of Naomi Hill” •Friends of Aiea Library 99-374 Pohai Place, Aiea, HI 96701 (donations by checks only) GAME...SET...MATCH

The family of Naomi Ford Hill created this Life Tributes page to make it easy to share your memories.

Naomi Vera Ford Hill was born in Greenwood, Mississippi as the...

Send flowers to the Hill family.