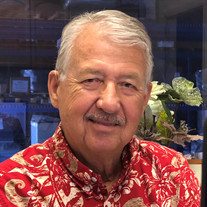 Nathan Henry (Hank) Gellert III 1943-2019 Nathan Henry Gellert III, affectionately known as Hank, was born in Lexington, North Carolina in 1943 to Wilna and Nathan Gellert. When he moved to Boise, Idaho before his senior year of high school, he became an avid skier and was famous for the helicopters he executed perfectly off the slopes at Bogus Basin. He studied Mechanical Engineering at the University of Idaho and spent a year after graduation skiing the French Alps. He moved to Honolulu, Hawaii in 1967 to work on the nuclear submarines at Pearl Harbor and it was there that he met the woman who would soon become his wife, Aloha Daisy Lee Makaimoku. Their courtship was a whirlwind and they married in Hilo, Hawaii in December 1968. Hank loved motorcycles and his red TR6, which he gave up with both sadness and delight when his first child, Jonathan, was born. Hank and Aloha moved their growing family from Coconut Grove, to Manoa, and then to their house in Maunawili. Their daughter Malia came next, then daughter Kapuaola, then son Kealii who was born in Idaho Falls where they lived for eighteen months before moving back to their house in Maunawili. Christian, the youngest son, arrived shortly after. Hank worked as a sales engineer at Hawaiian Equipment supplying pumps and compressors to the sugar mills, repaired boats at Marisco, and sold equipment at Durant Irvine before starting his own business, The Gellert Company, in 1985. He built a successful business and was known for his wisdom, kindness, and unflappable presence in the midst of any crisis. He was an incredible father, who spent weekends with his children at the beach, or deep in the Ko’olau Mountains where he loved to go in search of the elusive red palapalai fern he wanted to find for his wife. He never did find one. Hank was an adventurer and traveled around the world, first on his own, then with his wife and children. He said no matter where he went, there was no place as beautiful as Kailua Beach. He loved nothing more than sitting and watching the sunrise or taking his children and then his grandchildren swimming in the ocean. He delighted in being a grandfather to Max, Mehana, Paliku, and Kamaka and showered them with the same devotion he showed to his children. He and Aloha were steadfast in their love and a great role model during their fifty years of marriage. Hank was a good friend, a gentle and loving father, and many people’s first phone call, where he always had a good piece of advice—from how long to use a sponge to how to fix a broken fire pump. His passing leaves a huge hole in this world. Hank is survived by his wife, Aloha, their five children, and four grandchildren. He is preceded in death by his mother, Wilna and father, Nathan. A celebration of his life will be held at Kaneohe Congregational Church, 45-114 Waikapoki Rd, Kaneohe, HI 96744. Visitation at 10:00 AM and services at 11:00 AM on Saturday, August 24, 2019. In lieu of flowers, the family requests donations be made to the Hank Gellert Memorial fund at the Bank of Hawaii.

The family of Nathan Henry "Hank" Gellert III created this Life Tributes page to make it easy to share your memories.