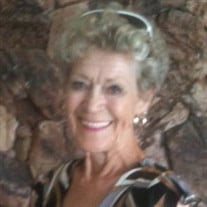 Norma Schram, 84, passed away peacefully at her home in Honolulu, Hawaii, March 3,2019. She was born in South Dakota, the fifth of 12 children to Vernon and Celestine Tobin. The family moved to Boistfort, Wash., where she attended school and graduated from Chehalis High School in 1953. Norma met Herb Anderson and the couple married that same year, and later had two sons. In 1980, she married Jack Schram and moved to Bellevue. Upon Jack’s retirement in 1995, they moved to Bracketville, Texas. After Jack’s death, Norma moved to Honolulu to be near her youngest son and lived there the last eight years of her life. Her working life was in Washington State. Norma worked at the telephone company in Olympia, then with Herb at their Chevron station on Main Street in Centralia, and lastly retiring from The Perry Brothers Poultry Plant in Chehalis. She was incredibly creative. Norma could whip up a meal, upholster the furniture, design and install landscaping, paint the house inside and out, lay carpet and tile or change out the toilet, you name it. Her talent seemed to have no end and she could do it all at the speed of light, with impeccable hair and makeup. Norma enjoyed both fishing and dancing and after retirement, she and Jack spent many summers traveling the country in their fifth wheel. One summer, they vacationed in Europe for several weeks. Norma was a loving, kind and generous daughter, sister, wife, mother and neighbor, who always put others’ needs before her own. Her physical beauty, strength and endurance were powered by an indomitable spirit. Her warm heart saw the beauty in all who’d open their hearts to her and her family. She has left an indelible mark on all who knew her and will be greatly missed. Norma is survived by sons, Vic (Gretchen) Anderson and Earl Anderson; brothers, Dennis (Arlene) Tobin and Larry (June) Tobin; sisters, Merilyn Montgomery, Dianne (Chuck) Main and Sue (Stan) Sadoski; along with numerous nieces and nephews; and her beloved dog, Tommy. She was preceded in death by her parents; and sisters, Betty Ideker, MaryLou Greer, Carol Manning and Colleen Tobin; and brothers, Randy Tobin and Virgil Tobin. Norma has asked there to be no final services and that her ashes be spread from the mountain tops. She loved the winds.

Norma Schram, 84, passed away peacefully at her home in Honolulu, Hawaii, March 3,2019. She was born in South Dakota, the fifth of 12 children to Vernon and Celestine Tobin. The family moved to Boistfort, Wash., where she attended school and... View Obituary & Service Information

The family of Norma Jean Schram created this Life Tributes page to make it easy to share your memories.

Norma Schram, 84, passed away peacefully at her home in Honolulu,...

Send flowers to the Schram family.