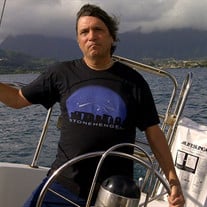 Paul DiAmbrosio, 59, died unexpectedly December 7, 2019, at his home in Honolulu, HI Paul was born in Wilmington, DE on February 3, 1960 and moved to Las Vegas with his family in 1974. He is a graduate of Chaparral High School and the University of Nevada Las Vegas. Paul enlisted in the United States Air Force as an airplane mechanic shortly after graduating high school and proudly served his country gaining the rank of sergeant before receiving an honorable discharge in 1983. Upon leaving the Air Force, he enrolled into UNLV and graduated with a degree in psychology and spent several rewarding years working with the mentally handicapped, but never lost his passion for airplanes. After obtaining his private pilot’s license, logging many hours taking friends and family for a spin, he returned to school and acquired his A&P license before starting his career as a commercial airplane mechanic. After finding his first job as a professional mechanic, he continued to hone his skills by earning many certifications while working at several companies including his dream job with Omni Air, where in 2018 he was recognized for his 20 years of service. As part of the Omni family, Paul traveled the world making many memories and even more friends. Paul also had many interests that extended well beyond airplanes including playing music, reading, fishing, camping, sailing, surfing, scuba diving and, most important to him, spending time with his friends and family. Paul will be missed by everyone that was fortunate enough to cross his path. Paul's family would like to express a special gratitude to his Omni family in Hawaii and around the country for all their help in making this extremely difficult time much easier to bear. Paul is survived by his brother, Mark (JoDee) DiAmbrosio; sisters, JoAnn Morgan, Sharon (Tony) DiAmbrosio-Kirch, and Janet (Scott) DiAmbrosio-Smith; and many nieces and nephews. He was preceded in death by his parents, Samuel and Fleetwood, and his sister, Tricia. The family will celebrate Paul’s life in Las Vegas on February 1, 2020 at the home of his sister, Janet.

Paul DiAmbrosio, 59, died unexpectedly December 7, 2019, at his home in Honolulu, HI Paul was born in Wilmington, DE on February 3, 1960 and moved to Las Vegas with his family in 1974. He is a graduate of Chaparral High School and the University... View Obituary & Service Information

The family of Paul DiAmbrosio created this Life Tributes page to make it easy to share your memories.

Send flowers to the DiAmbrosio family.