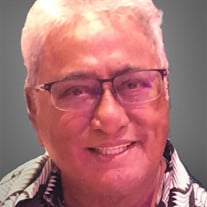 Being the youngest in his Doctorello ‘Ohana, Randy was known by many different names: Randolph, Randy, “Dukie,” “Duke,” and going all the way back to his school days, “mecuricome boy.” “Uncle Dukie often fondly referred to his youth and how he acquired that particular name; “You know, my sistah, Shirley (your mother),” always in his very jovial manner, “used to take care of me when I was young and when I didn’t listen to her, uhhh, she would ‘buss me up!’ And back in the day, when you had a cut, scrape or kakio, mecuricome was used to clean and protect your cut but (the drawback) it used to leave your cut all red; so when I would go to school everyone would call me “mecuricome boy” because my body was just covered in red blotches!” Although my mother used to “buss him up” all the time, he only spoke of her and his other siblings with such love and reverence.” (provided by Randy’s nephew, Fern.) Randolph Kilikino Doctorello, Sr. departed this earthly life on Thursday, September 17, 2020, at his home in Honolulu, Hawai’i. He was born in Lahaina, Maui, the youngest child to Joseph and Margaret (Kepa’a) Doctorello (predeceased); was raised in Kalihi Valley; was a proud alumnus of Saint Louis School, Honolulu, Hawai’i; was an avid and active member of the Plumbers & Pipefitters Local 675 Union for 55+ years and retired as a Master Plumber. Of all his extraordinary life’s accomplishments, Randy’s true passion was for Hawaiian Music and, more specifically, for his special ‘Hawaiian Slack Key’ or Ki Ho’alu style of playing the guitar. While growing up, everyone in the household learned to sing and play different musical instruments. It eventually led him to the path of being a part of the family band in the late 60’s & 70’s carrying him through to being a solo Hawaiian entertainer, serenading tourists in Waikiki to performing at local gigs island wide. He was well known and highly respected throughout the local music community for his “nahe nahe” style (soft, gentle, and melodious voice) of playing. He was truly a master in his own right, always working so diligently at refining his craft and guitar skills. Among his other pursuits, Randy was a true sportsman and athlete, always pushing the limits to maintain that competitive edge. For many years, Randy maintained a membership at the local YMCA on Atkinson Drive near the Ala Moana Shopping Center where he, not only worked out on a daily basis, but where he also, avidly and very vigorously, played racquetball truly cementing his reputation as a racquetball enthusiast. Randy will be forever lovingly remembered by his children, Thuresa (Doctorello) Fowler, Randolph (Randy) Doctorello, Jr., and Leah Doctorello; his grandchildren, Amanda Drummond and CJ Drummond; his great-granddaughter, Kalea Drummond; his sister-in-law, June Doctorello and numerous nieces, nephews and cousins. He was preceded in death by his brothers, Eddie Doctorello and Howard Doctorello, and his sister, Shirley (Doctorello) Kealoha. Randy was the personification of Hawai’i’s “Aloha Spirit” and larger than life itself! We humbly ask that you share your stories, experiences, and pictures of Randy on this website. Due to COVID-19 restrictions, a private spreading of Randy’s Ashes at sea will be held on Thursday, October 1, 2020, with his immediate family only. To honor and memorialize Randy properly, a ‘Celebration of Randy’s Life’ will be announced later. Also, as a development of COVID-19, many of you have inquired as to how you may express your condolences and provide support. With humble hearts full of gratitude, Randy’s family has set-up an account where monetary contributions will be accepted via Zelle 206-300-8311 or Venmo @Lj-Doc transfer. Randy’s ‘Ohana extends a heartfelt “Mahalo Nui Loa” for your prayers, messages of condolences and, most especially, for being a big part of their dad’s life! “Dad was the collective embodiment of all that surrounded him; from his daily interactions to his endearing memories of his ‘Beach Boys’ club to his late nights of entertaining the masses. He will be missed but his essence will live on in all that have shared time and space with him.” (provided by his children) Me Ke Aloha Pumehana, Thuresa, Randy, Leah and the entire Doctorello ‘Ohana

The family of Randolph Kilikino Doctorello created this Life Tributes page to make it easy to share your memories.

Being the youngest in his Doctorello ‘Ohana, Randy was known...

Send flowers to the Doctorello family.