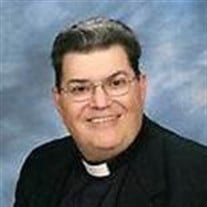 Rev. Richard Cromwell, age 71, died on January 1, 2019 at the Queen’s Medical Center in Honolulu. Rev. Cromwell is survived by his wife, Margaret, his son, Richard, both of whom reside in Kailua; his mother, Corinne, and brother, Douglas, both of whom reside in Whiting, N.J. Rev. Cromwell was a graduate of Drew University, Madison, N.J. and Philadelphia Divinity School, PA. After ordination as a deacon by Bishop Leland Stark, he served as curate at St. Paul’s Episcopal Church in Morris Plains, N.J. where he was later ordained to the priesthood by the Right Rev. George Rath, Bishop of the Episcopal Diocese of Newark, N.J. Rev. Cromwell was called as Rector of Church of the Holy Communion, Norwood, N.J. (1975-1979) where in 1976 he created, developed and founded Episcopal Child Care Services (ECCS), a thriving day care center for children from infancy through kindergarten which continues to serve Bergen County. Richard then moved to Andover Newton Theological School in Newton, MA where he completed doctoral level studies in pastoral counseling during the day and played piano professionally in downtown Boston in the evening at Quincy Market. Richard pursued his desire to become a non-stipendiary priest. As a Licensed Professional Counselor, Rev Cromwell found his greatest strength as an alcohol and drug abuse treatment specialist and NJ certified AIDS Educator in the early 1980s at Discovery Institute in Marlboro Township, NJ. He later worked as Clinical Coordinator at Pathway House, the first residential treatment facility for adults with HIV/AIDS in NJ. He was a tireless advocate for the health care needs of its residents. Later he became the Liaison to Somerset County Jail from Richard Hall Community Mental Health Center in Bridgewater, NJ where he successfully helped many convicted first time non-violent offenders obtain placement in substance abuse treatment centers in lieu of prison time. Rev. Cromwell was regarded as a friend of the court in Somerset County and his evaluations were accepted by the majority of treatment facilities as their own evaluation expediting the process and eliminating many roadblocks to treatment. In addition, Rev. Cromwell assisted at St. David’s Episcopal Church, in Cranbury, NJ. He also served as a supply priest for the Diocese of New Jersey in a number of parishes, especially year round at St Peter’s at the Light, Barnegat Light, NJ and many summers at St. John’s Episcopal Church, Avon-by-the-Sea, NJ. Rev. Cromwell accepted a position as priest-in-charge at St. George’s Church, Pennsville after which he retired and moved to Oahu. Although retired, Rev. Cromwell continued to assist at St. Christopher’s Episcopal Church in Kailua. Rev. Cromwell was very active in ministering to the homeless and his parish supported his efforts. Rev. Cromwell loved to tell stories, loved civil war re-enacting even here in Oahu and had a wonderful sense of humor. He was loved and admired by his family and friends who respected and admired the selfless work he did for others. We know God welcomed him with open arms and then said “I need your help”. Memorial Services For Rev. Richard Cromwell will be held on Saturday, February 9, 2019 at 11:00am at St. Christopher's Episcopal Church in Kailua. Burial at a later date.

Rev. Richard Cromwell, age 71, died on January 1, 2019 at the Queen&#8217;s Medical Center in Honolulu. Rev. Cromwell is survived by his wife, Margaret, his son, Richard, both of whom reside in Kailua; his mother, Corinne, and brother, Douglas,... View Obituary & Service Information

The family of Rev. Richard Cromwell created this Life Tributes page to make it easy to share your memories.

Send flowers to the Cromwell family.