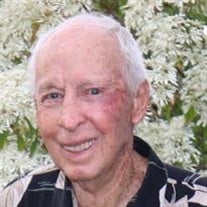 Robert "Bob" McDonald, 86, of Captain Cook & Honolulu, passed away peacefully after losing his battle with prostate cancer on May 3, 2018 at the VA Community Living Center at Tripler Army Medical Center in Honolulu. Bob was born in Niagara Falls, NY on October 31, 1931, the fourth of six children of Roland and Christine McDonald. The McDonald family had roots in Scotland and Bob was extremely proud of his Scottish heritage. Bob’s family moved west to California when Bob was a teen and he proudly joined the US Navy immediately after high school. He served between the Korean and Vietnam Wars and he was always honored to have served his country. After he left the Navy, Bob raised a family and worked in Southern California for 20 years before finally finding his way to Kona. Bob took great pride in caring for the land, and the land loved him back. Running his coffee farm was non-stop work, but Bob enjoyed the freedom of plantation life where at any moment he could look up and watch the Hawaiian (‘io) hawks soaring among the clouds. He truly met his calling as a coffee farmer, steward of the land and a dear friend to all who met him. It was through the coffee farm that Bob met his wife, Jean. She was a city girl unfamiliar with the wideopen spaces of the Big Island. But the mountain, like Bob, captured her heart. Together they made a beautiful life growing Kona coffee in a house he built himself. They named it Hale O’Iolani – the house of the hawk in heaven – because it was such a spiritual & magical place high in the mountains of Kona. Kona coffee was just beginning its rise to fame, and Bob was one of the pioneers to perfect the art of growing the precious beans. Lovingly known as Kona Bob, other farmers would visit him for advice and he never turned anyone away. His idea of a “blue ribbon day” was picking coffee at the farm with his family. Friends and visitors to the farm always left with a deeper understanding of not only coffee farming, but of the love and respect Bob had for the land and the passion he had for making the perfect cup of coffee. “Pappie”, as his grandchildren knew him, could best be described as laid back and easygoing, which is why strangers left as friends and friends stayed friends for life. Bob loved aviation, sports, nature and travel. As Bob traveled the world, he saw the beauty and the good in all the places he visited and every person he met. He is survived by wife Jean Yokoyama-McDonald; sister Una Smith of Laguna Woods, California; son Duane (Peggi) McDonald of Dana Point, California; daughter Leslie (Dave) Barrett of Prescott, Arizona; son Carter (Heather) Yokoyama of Captain Cook; son Colin (Lisa) Yokoyama of Honolulu; grandchildren Gavin McDonald, Jessica & Madeline Barrett, Tavi & Tia Yokoyama; as well as numerous nieces and nephews. The family would like to thank Hospice Hawaii for their loving and incredible care of Bob. In lieu of flowers or other gifts you are invited to make contributions to Hospice Hawaii. Contributions may be left with the family at the services. Services will be held at the National Cemetery of the Pacific Punchbowl on Friday, August 3, 2018 at 10:30am with a Scottish inurnment with military honors. Aloha attire. Celebration of Life to follow at the Pacific Club (limited parking) in downtown Honolulu at Fourteen Fifty-One Queen Emma Street.

Robert "Bob" McDonald, 86, of Captain Cook & Honolulu, passed away peacefully after losing his battle with prostate cancer on May 3, 2018 at the VA Community Living Center at Tripler Army Medical Center in Honolulu. Bob was born in Niagara Falls,... View Obituary & Service Information

The family of Robert Alfred McDonald created this Life Tributes page to make it easy to share your memories.

Send flowers to the McDonald family.