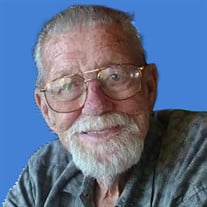 Robert J. Van Dusen , "Van", "Vannie", 85 of Pawa'a passed away 8/15/21. He was born to Charles and Gertrude (Ruth) Van Dusen in Hastings, NE. Shortly after graduation from Lincoln Northeast High school he was stationed at Schofield Barracks with the US Army. While his service was brief, he fell in love with all of Hawai'i- it's people, beauty, culture and especially music. Robert worked for Chevron refineries, shift-working and commuting an hour each way to provide a good life for us. He accepted many challenges and even learned French to communicate with local workers while setting up a refinery in Belgium. Our family lived in Waterloo, Belgium for 4 years, then returned back to Hawaii and Dad continued at Chevron, retiring after 31 years. Robert has been blessed to live and work at Kulana Hale for the past 21 years. The Kulana Hale 'Ohana was very dear to Dad's heart and has been so kind to our family during this time. Robert wore many hats in his lifetime, but none more valuable than that of Father. He met my oldest brother Myles Kepa when he was a toddler and immediately took him as his own, then came my brother Mark and myself (Mona). He was involved in all aspects our lives -schooling, sports and anything we were interested in. He was our leader, our mentor...one who we could call and talk about anything and seek guidance from. He never made us feel bad, only offering his wisdom, love and support. My dad has a great sense of humor and a brilliant mind, enjoyed crosswords, sudoku and anything to do with numerical calculations. He would often call us and the grandkids trying to get them to answer his number games.. If we were able to answer, he would be so delighted, if we couldn't he would talk us through to the solution and still be delighted. Before Google, we always would say.. ask dad, he knows stuff. Dad liked being socially active- going to and volunteering at church, listening to Hawaiian music at elks or at Kani Ka Pila Grill, bowling, or just going out and flirting with the waitresses (and more recently nurses). He was an avid sports fan who loved following and supporting local athletes. I'm sure if you look up wala'au in the dictionary, his picture would be there. Robert is survived by his brother Dale Van Dusen (NE) , his 3 children- Myles Kepa Ah Nee (Glenda) Dr. Mark Van Dusen (Laine) and Mona Kidd (Chris), Grandchildren- Marisa, Brent, Brooke, Bo, Rain, Pono, Nicholas and Christina. and 1 great grandchild- Malia. Our family thanks everyone for being a part of his life and asks that you honor him by living each day with ALOHA.

The family of Robert James Van Dusen created this Life Tributes page to make it easy to share your memories.