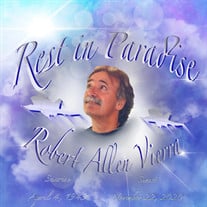 Robert “Bob” Allen Vierra was born in Honolulu on April 4, 1949 to John Vierra and Virginia DeMattos Vierra. He was the youngest of 5 children. He attended Koko Head Elementary, Niu Valley Middle, and graduated from Kalani High School in 1968. After high school, Bob joined the United States Air Force in August 1968 and earned the rank of Sergeant as a Jet Engine Mechanic. He traveled around the world to various Air Force bases, including Arizona and Germany. He came home and married Cyrile “Cycy” D.W. Reed (now Lambert). Together, they returned to Germany and, in 1972, they welcomed a son, Robert Allen Vierra, Jr. (now Vierra-Lambert, predeceased on December 3, 2014). He was honorably discharged in August 1974. They later divorced. Bob met and married Ruth Kaleialoha “Kalei” Williams in 1981. He said, “she was a good wife, but a better mother!”. Together, they welcomed three children, Ka‘iukapu Kaleialoha, Na‘inoa Hokumakamae, and Kevyn Makanaaloha in 1983, 1987, and 1991, respectively. Of his children, he says, “I love [them] dearly. I’m so proud of their accomplishments.” Bob spent the majority of his life actively working with his hands. For about 40 years, he was an automotive technician at Jack Shuttleworths, Love Thomas Motors, Ala Moana Volkswagen, Pac MC, Oldsmobile, and BMW of Honolulu. He also worked as a service dispatcher, a supervisor at City Mill, and retired after working as a driver for TheBus. His hobbies included spending time with his children and grandchildren, talking stories, taking care of and raising animals, woodworking, watching TV, working in the yard, and anything to do with cars. Bob loved animals. He raised geese, ducks, chickens, turtles, koi, rabbits, and lovebirds. There was always a dog in his Kahalu‘u home where he lived from 1975. Bob joined the walking club at Windward Mall, Luk Tung Kuen, where he enjoyed many early mornings exercising and spending time with the numerous friends he made there. Bob was very passionate about his Portuguese culture, joining the Portuguese Culture & Historical Center. He spent hours poring over Portuguese historical texts and documents, discussing Portuguese culture and history with cultural experts, charting his genealogy, and learning more about his ancestors and family. Bob is survived by his wife, Kaleialoha, his daughter, Ka‘iukapu Kaleialoha, his sons, Na‘inoa Hokumakamae and Kevyn Makanaaloha, his daughters-in-law, Tarrah Vierra-Lambert, Francine Vierra, and Tiani Josue, his grandchildren, Kameamomilani, Shysty, Kealohanani, Shazen, Shyley, Lukanelakehaku, Saber, Zandyn, Zayshen, Ziani-Lee, and Baby Z, his grandpuppy, Marley, his sister, Jeanne Texeira, nieces and nephews, grandnieces and grandnephews. He loved his family very much. Service to scatter Bob’s ashes will be at Halona (Blow Hole) on April 4, 2021 beginning at 8:00 a.m. Drive-By to pay respects to the family will be from 1:00 - 3:00 p.m. at 45-244 Iole St., Kaneohe, Hawai‘i 96744. “I hope it’s not good bye, just catch u later!”

The family of Robert Allen Vierra created this Life Tributes page to make it easy to share your memories.

Send flowers to the Vierra family.