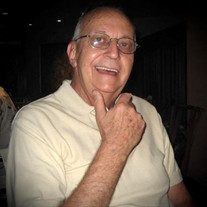 Ronald Ray Herr February 11, 1935 - January 1, 2020 Ronald Ray Herr, 84 years old, passed away peacefully on January 1, 2020. He is survived by his wife, Linda Herr, and his children Jeffrey Herr (Janet), Julie Jones (Jerry) and Jennie Kettner (Dale). Ron was born in Bluffton, Ohio on February 11, 1935 to Claire and Dina Herr. He grew up on a family farm with his parents and three younger siblings. During high school he played on his school’s basketball team and was active in Future Farmers of America. Ron was married to Doris Herr from 1957-1988. They had three children and seven grandchildren together. Ron moved his family from Ohio to California in 1966 to pursue an employment opportunity with the U.S. government. He continued with the government until his retirement, receiving several promotions throughout the years. His intellect and knowledge of electronics and mechanics earned him many awards and recognitions from his employers. He completed numerous specialized training courses with the U.S. Navy, U.S. Air force and Lockheed Missiles and Space Company. Ron retired with a disability in 1988 and moved to the island of Hawaii where he married Linda. They lived near Captain Cook for approximately 15 years before moving to Honolulu. Ron was a car racing enthusiast, was passionate about politics, and enjoyed watching sports. When he was younger he enjoyed being active outdoors. While raising his family, he frequently organized camping trips and hikes and enjoyed traveling around the U.S., especially to National Parks. While living on the big island he liked to swim in the ocean. In Honolulu he took daily walks around Waikiki for as long as he was able. Ron was a Christian and put his faith in the mercy and grace of the Lord Jesus Christ. His family is confident of the healing, the joy and the peace he has found in Heaven. “Therefore we are always confident and know that as long as we are at home in the body we are away from the Lord. For we live by faith, not by sight. We are confident, I say, and would prefer to be away from the body and at home with the Lord.” 2 Corinthians 5:6-8

The family of Ronald Ray Herr created this Life Tributes page to make it easy to share your memories.

Send flowers to the Herr family.