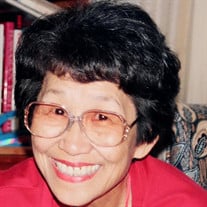 Ruth Shon Kiehm, aged 89, passed away on Thursday, November 22, 2018. She was born in Honolulu on September 11, 1929, and grew up with siblings Isaiah “Ike” Shon, Asaiah “Al” Shon, Victoria “Vicky” Lee, Elizabeth “Liz” Hall, and Rose “Rosie” Yim. Ruth attended Liloliho Elementary and Washington Middle schools, then graduated from Roosevelt High School in 1947. She attended UCLA from 1947 to 1951, earning a Bachelor of Arts degree, and commenced her early career in education as a teacher in the Los Angeles Unified School District in the early 1950s. Ruth returned to Honolulu to further her education, earning a Masters of Education degree from the University of Hawaii at Manoa. Ruth worked for 12 years in the Hawaii State Department of Education as a special education and language arts resource teacher until she was asked to serve as a seminar leader and demonstration teacher for the National Defense Education Act Institute. She was hired by the University of Hawaii in 1966 as a curriculum writer for the Curriculum Research Development Group until she became the Director of Field Services, supervising the student teacher program for the UH College of Education in 1969, where she served until retiring in 1989. Ruth was also active in organizations including Hawaii Education Association, Association of Teacher Educators, Pi Lambda Theta, Delta Kappa Gamma Society International, among others. Ruth and her late husband, Joe Kiehm, first met at Roosevelt High School in the mid-1940s, and were married in 1955. Ruth is survived by children Rick Kiehm (Natalie), Judy Kiehm Kern (Bill), and Kathy Kiehm Matsuo (Mike), sister Rose Yim, grandchildren Billy and Sarah Kern, Courtney and Connor Kiehm. A memorial service celebrating her life will be held Saturday, December 29, 2018 at 4:00pm (visitation starting at 3:00pm) at the First United Methodist Church, 1020 S Beretania St., Honolulu. In lieu of flowers, memorial donations can be made to the University of Hawaii College of Education, or the Alzheimer’s Association Aloha Chapter.

The family of Ruth Shon Kiehm created this Life Tributes page to make it easy to share your memories.

Send flowers to the Kiehm family.