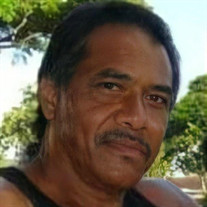 Saimone Loiti Mafi Saimone Loiti Mafi (Loiti), 62, of Ewa Beach, Hawai'i, was born on February 24, 1959 in Tongatapu, Tonga, to Father, Falemasiva Pangi (Deceased) and Mother, Finepanilolo Pangi (Deceased). He was the Third youngest of (8) Brothers and moved here to Hawai'i at the early age of 19. He is survived by his spouse, Lorelee Sampaio and their (6) Children, (3) of them being his Stepchildren. From eldest to youngest,Scott Ali'i- Stepson (Ariel), Tupou Gonzales-Stepdaughter (Chris), Lavinia Sampaio-Nau-Stepdaughter, Saimone Mafi Jr.-Son, Finepanilolo Mafi-Daughter, and Huluni'e Mafi-Daughter (Tyler). He is also survived by his (4) Grandson's and (8) Granddaughters. Loiti was a man of few words, but could light up a conversation with his beautiful smile and gentle laugh. In his younger years, he dedicated his time and energy playing the sport that he loved to play, Rugby. Back in the early 90's he and his team won the championship here at Kapiolani Park under the Hawai'i Rugby Union. Besides his love for sports,enjoyed listening to music and playing his Guitar. Although he would never fully sing a song or play his Guitar out loudly, his love for music couldn't go unnoticed. Another love that he shared, was the love that he had for his spouse or as he considered, his wife, Lorelee. After spending nearly 35 years together and going through many ups and downs, through it all, they remained inseparable. Through their crazy love relationship, they were blessed with 6 children, 3 of them being his stepchildren that he took responsibility for. Although he stood firm in his traditional and cultural beliefs, he tried his best to raise each and everyone of his children,the best way he could. Working hard and providing for them, was one of many ways that he showed his love. He started working as a Tree Trimmer until his passion for mason work developed. He began his journey as a Mason back in the early 80's and has been doing that trade of work all the way up until the last month of his life. He was a hard worker that never liked to miss work, even on his sick days. He would drop whatever it was that he was doing, just to be able to work because he truly was a hardworking man. As the years went on, the amount of strength and love he had for work, slowed down and was poured onto his grandchildren. He enjoyed every chance he had with them and loved to keep them entertained through the smallest acts. It was the simplest gestures that he would do that made him the best Papa ever. He taught his Grandson's how to fish and ride bikes and would always go on a golf ball hunt just to find something to do with them. His Granddaughters were precious in his eyes and he loved to let each of them take charge in their own ways, just have that time. Although his life wasn't the best as it could've been, he still made the best of it. That is why we will always be grateful for all that he has done for us, and we will always cherish all of the memories that we have of him. His spirit will live on and will finally be at peace as we will celebrate his life today, tomorrow and forever. We love and miss you so much!! May you rest in heavenly peace

The family of Saimone Loiti Mafi created this Life Tributes page to make it easy to share your memories.

Send flowers to the Mafi family.