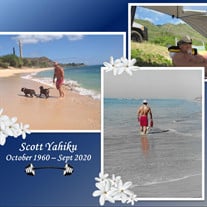 Passionate Husband, Father, & Bodybuilder, passed away on 2 Sept 2020. Scott is survived by his loving wife Andrea of 38 years, their furries Sukki & Biggy boy, son Sundae Manawalea Yahiku, daughter Sasha Kalehua Yahiku-Brown (Ethan), their children Rylei and “lil man” Ronnie Brown, his Mother Irene “Dede” Wilhelm (Jack), and Brother RJ Yahiku (Kathy). Scott left this world peacefully on a beautiful Hawaiian afternoon after a long battle with Cancer. Scott was born in Lihue, Kaua’i in Oct 1960 to Jerry K. Yahiku Sr. and Irene Yahiku (Wilhelm). In 1965 he moved to the Big Island of Hawaii with his father and 2 brothers; graduated from Hilo High School in 1978, and received his baccalaureate of arts degree in Hawaiian Anthropology from the University of Hawaii at Hilo in 1984. Scott entered the US Army as a PFC in 1987, was commissioned in 1993, and retired after 20 years of service in 2007. He later earned a master of arts in Business Administration in 2012, and a master of arts in Adult Education in 2013. Scott continued his logistics career working with the Defense Logistics Agency, at Pearl Harbor – Hawaii through 2020. Scott was very engaged in Bodybuilding, he’s tutored and inspired many up and coming bodybuilders and did not hesitate to share his knowledge of fitness and nutrition. He was regularly approached at the gym for help and would always stop to answer questions or provide a “spot” even though he preferred not to be interrupted while he was in beast mode. Oct 2020 (60) was the date he set for reaching his all-time heaviest squat record. Scott will be remembered for his enthusiastic (and candid) point of view, his sense of humor, devotion to family, encouragement of his children’s goals, and his patience and support of his wife’s endless creative endeavors. Scott was deeply thoughtful, loving, and selfless; his absence has created a great void in our lives, we will miss him dearly. A celebration of life will occur at a later time to bring family and invited guests together when it is safe to gather and socialize.

The family of Scott Bernard Yahiku created this Life Tributes page to make it easy to share your memories.

Send flowers to the Yahiku family.