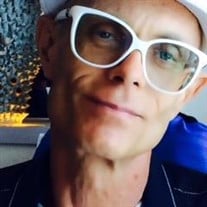 Steven Roy Opstad, a Hawaii resident for more than 45 years, passed away September 7, 2019 from complications due to a lung infection. He was 63. Steven was the co-owner of one of Honolulu’s premier salons, and was well-known throughout the community for his love of the arts, fashion and travel. Steven was born in Seattle, Wash. on February 25, 1956 into a loving middle-class family. Upon his graduation from Queen Anne High School, Steven and a friend celebrated with an extended vacation in Hawaii. It was a life-changing decision for Steven, who fell in love with Hawaii and never left. Two months after his arrival, Steven met Michael Lyons who remained his partner and center of his life for the next 45 years. With Michael, Steven found his career path as a beautician and highly skilled hair colorist. In 1994, they opened StevenMichael’s in Kaimuki, which quickly became one of the top salons in Honolulu, catering to a broad clientele of all ages and walks of life. Through his work, Steven was able to indulge his interest in people, learn about other cultures and appreciate the uniqueness of different generations. Steven served as many as 10 clients a day, and many became personal friends, social companions and travel partners. Over the course of their career, Steven and Michael had numerous opportunities—through weddings, special celebrations, and film and television productions—to touch the lives of locals, celebrities and an international clientele. It sparked an interest in world travel and after a memorable trip to Korea, Steven became a lifelong aficionado of kimchi. A dedicated ballet dancer, an avid skier and ice skater, Steven also embraced yoga and meditation for health and balance. His diagnosis of a rare bacterial infection in his lungs came as a shock. But with his usual initiative and proactive attitude, he researched his condition and discovered a clinic in Denver, CO that specialized in respiratory conditions like his. A warm heart and sparkling personality drew many people into Steven’s circle. His kind and caring heart helped keep them there. During his life span of 23,205 days, Steven made and kept many friends and even stayed in touch with a baby girl, Jane Elliott, born at the same time in the same delivery room as Steven. Steven’s artistic nature found expression in many ways, from his crafting hobbies, his appreciation of art and music and most personally, in his love of fine fashion. Teasingly known as “Mr. Gucci” to his family and friends, Steven was rarely seen without some item of apparel by the famous designer. Steven was predeceased by his mother, Elaine, and father, Louis. He is survived by his life partner Michael, brother David Opstad and his wife, Paige, and niece Hannah and nephew Nathan of Seattle, Washington. A Celebration of Life will be held at Town Restaurant on October 20 at 2:30 pm. The family asks no flowers, and to reflect the wonderful light and love Steven embodied, attendees are asked to wear white for the occasion.

Steven Roy Opstad, a Hawaii resident for more than 45 years, passed away September 7, 2019 from complications due to a lung infection. He was 63. Steven was the co-owner of one of Honolulu&#8217;s premier salons, and was well-known throughout... View Obituary & Service Information

The family of Steven Roy Opstad created this Life Tributes page to make it easy to share your memories.

Steven Roy Opstad, a Hawaii resident for more than 45 years,...

Send flowers to the Opstad family.