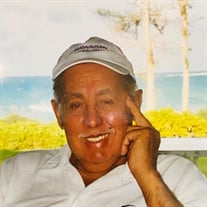 Ted Escobar of Sun City West, Arizona, passed away peacefully after a short illness at his home on October 6, 2021. His wife Christine and his sons Erich and Stuart were by his side. It was a beautiful day, and Ted looked out over a golf course during his last days, as he wanted. Ted was born in Makaweli, Kauai, on October 7, 1935, to the late Theodore Milton Escobar and Anna Montayre Escobar. He graduated from Roosevelt High School in 1954, attended the University of Hawaii, and earned a bachelor's degree in business from the University of Puget Sound, Washington, in 1977. After graduation from high school, he joined the United States Air Force as a jet fighter student stationed at Amarillo Air Force Base in Texas. Ted found his niche in aircraft maintenance. He worked for NASA and the United States Air Force as an aircraft mechanic. Ted then worked for Continental Airlines for over 20 years, retiring as Regional Maintenance Manager, SFO. He also worked for Hawaiian Airlines as Chief Inspector, Lockheed Air Terminal as Manager of Technical Services in Guam, DynCorp International as Director of Maintenance, and Asia Pacific Airlines as Director of Quality Control. Ted loved aviation and worked into his late 70s. He maintained his friendships with "Ex-Con" (Ex-Continental Airlines) friends and aviation colleagues. Ted served as a director for ARECA (Association of Retired Employees of Continental Airlines) for the 2020-2022 term of office. He valued his friendships with his RHS Class of '54 and attended almost every Roosevelt High School Class of 1954 reunion. Ted lived and worked in Alabama, Texas, California, Washington State, Louisiana, Hawaii, Guam, and Arizona. However, Hawaii was always home. Ted loved sports, and with his wife Christine, he surfed, windsurfed, competed in triathlons, and trained with the UH Masters Swimming Team. His favorite sports in Guam were windsurfing, swimming, running, and paddling with the Paluman Tasi Paddling Team. When he retired in Arizona, he adopted his beloved Vizslas, Koa and KeKoa, and pursued his passion for golf. Ted's work and retirement life always afforded him opportunities to visit his children and grandchildren in California. These times together as a family were among the most satisfying and rewarding for him. During the Covid lockdown, his most cherished activity of the day was on the phone visiting with his family and friends. Ted leaves behind his wife of 33 years, Christine Davis Escobar, his children Erich (Sue) Escobar, Sheri (Chris) Good, Stuart (Kelly) Escobar, grandchildren Louie, Jennifer, Jonathan, Jessica, Jake, and Madi, great-granddaughter Charlotte, brother Robert Escobar, sisters-in-law Gail Davis Keanaaina and Paula Crumpacker Fisher, brothers-in-law John Davis and Robert Davis, nieces, nephews, cousins, and service dog Kekoa Escobar. Ted's brother Mike Escobar, sister Joni Kemp, nephew Samson "Sammy" Escobar, and service dog Koa Escobar predeceased him. A Funeral Mass will be held at St. Augustine Church By-The-Sea, Waikiki, on January 29, 2022, at 9:30 a.m. Rite of Committal will follow at Oahu Cemetery.

Ted Escobar of Sun City West, Arizona, passed away peacefully after a short illness at his home on October 6, 2021. His wife Christine and his sons Erich and Stuart were by his side. It was a beautiful day, and Ted looked out over a golf course... View Obituary & Service Information

The family of Theodore Francis Escobar created this Life Tributes page to make it easy to share your memories.

Send flowers to the Escobar family.