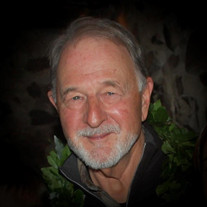 THOMAS “Tom” COOPER 77, of Kailua, O'ahu, passed away peacefully at home surrounded by family on April 6, 2022. Tom is survived by his loving wife Jenny, brother Randy of Port Townsend, WA, daughters Tracey (Rob) Borgstrom of Swarthmore, PA, Jill (Jory) Hopkins of Longmont, CO and grandchildren, Emma and Carl Borgstrom and Jacob and Joshua Hopkins as well as numerous other relatives. Born and raised in St. Louis, Missouri, Tom Cooper completed a Bachelor of Science degree in Biology and Chemistry at Washington University as well as a Master of Science degree in biological research from St. Louis University with a specialty in Comparative Physiology. Following graduation, he joined the United States Navy and received his wings as a designated Aerospace Physiologist. Embarking on what would culminate in a twenty-six year career as a Naval Officer, Tom retired at the rank of Captain. During his career as a Naval Aerospace Physiologist, he served as an aviation survival instructor, research scientist for a joint Navy/NASA program and program manager for the Navy/Marine Corps Aviation Life Support Systems at the Naval Air Systems Command in Washington D.C. Tom also earned a Master of Arts in Human Resources/Organizational Behavior from Pepperdine University and graduated from the Defense Systems Management College with a certification as a Department of Defense Acquisition Professional while on active duty. Following his retirement from the Navy, Tom worked as an Executive Vice President for a small, Virginia based company devoted to providing aviation safety and life support systems engineering services. When an opportunity presented itself to return to Hawaii where he had served two tours of duty, he leapt at the chance. He and his wife, Jenny returned to Hawaii to reside in Koloa, Kauai. There Tom established the Kauai office for General Dynamics Advanced Information Systems providing direct support to the Office of Naval Research. He retired as the Senior Manager Business Operations and Kauai Office Director. Of all his accomplishments,Tom was most proud of building and mentoring a talented team of Kauai born systems and software engineers, exemplifying his belief of keeping local talent on island. During his many years on Kauai, Tom was active in both state and county organizations having served as Chairman for the Kauai Chamber of Commerce; Chairman, Kauai Workforce Investment Board; Chairman, Kauai Economic Development Board (KEDB); founding member of the KEDB’s Aloha `ike (To Love Learning) program; founding member, Leadership Kauai Board of Directors; Commissioner, Salary Commission County of Kauai; member of the Board of Directors and member-at-large, Science & Technology, Economic Development Alliance of Hawaii; and member of the Board of Directors, High Technology Development Venture. Services to be held at a later time. In lieu of flowers, please make a donation in Tom's memory to the Navy-Marine Corps Relief Society at the website: https://support.nmcrs.org/a/homepage Or by phone at (800) 654-8364 Or by mail at: Navy-Marine Corps Relief Society Attn: Development Department 875 N. Randolph St. Ste 225 Arlington, VA 22203

The family of Thomas "Tom" Cooper created this Life Tributes page to make it easy to share your memories.