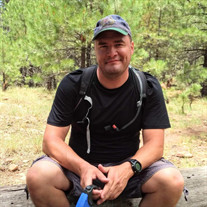 Timothy Lee Winter 12/1/1971 – 1/24/2022 On January 24, 2022, Timothy Lee (Weisser) Winter, aged 50, of Phoenix Arizona, died unexpectedly on the island of Oahu, Hawaii after entering the water on Ke Ike Beach for an afternoon swim. While Tim was known by most people as “Tim”, he also answered to “shorty” (his beloved Mother); “Number 2” (his Father); “TIMMY!” (a group of much-valued friends); “Slacker” (a specific dear friend); “Babe, Handsome Man, and My Love” (his treasured wife). Tim was born on December 1, 1971 in Rapid City, South Dakota. Throughout his life he spent time living in South Dakota, Colorado, Taiwan and of course his beloved Hawaii, where he had hoped to eventually move back to. Tim graduated from Smoky Hill High School in Aurora, Colorado, class of 1990. He attended Arizona State University for the 1990-1991 academic year, but transferred to Metropolitan State University of Denver where he obtained a BS degree in Computer Science/Computer Graphics and a minor in Art in 1995. Tim spent the majority of his career in the gaming industry, while dabbling in real estate on the side. In 2015, he decided to change career paths and obtained his real estate license. In January of 2020 he obtained his broker license and opened 4DC Realty in September 2021. Tim is survived by his loving wife, Sarah (Gulick)Winter, Phoenix, AZ; Sarah’s parents, Sharman & Garry Heberer, Golden Valley, AZ; Mother, Marjorie (Winter) Sutton, New River AZ; Father, LeRoy Weisser, Rapid City SD; Brother, Todd Weisser, New River AZ; Maternal aunt, Janice (Winter) Perine, Glendale AZ. He also has many relation in cousins and friends that hold him dear. Expressions of many relatives and friends can be summed up by the words written by Leona Alexander, a cousin: “Our whole family just adored Tim – he had the biggest heart and the most patience of anyone we’ve known. Tim was truly a beautiful and special person. He had nothing but love and acceptance in his heart, and he never once judged anyone.” Celebration of Life services will be held February 5, 2022 at 11 am at Desert Hills Presbyterian Church 34605 N Tom Darlington Rd, Scottsdale AZ 85266. Private family inurnment will be held at a later date. Online condolences can be left at https://www.oahumortuary.com/obituaries/ If you would care to make a donation in lieu of flowers, You can donate to the Cancer Support Community in Phoenix, AZ in his name. This was an organization that was very near to Tim’s heart. They can be reached at 602-712-1006 or https://cscaz.gnosishosting.net/Portal/Donate

The family of Timothy Lee Winter created this Life Tributes page to make it easy to share your memories.

Send flowers to the Winter family.