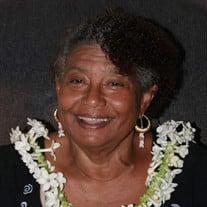 In Loving Memory of TONI ANDREA TURNER. AKA: Toni the Turtle. Born November 26, 1942 to Gregory Lewis Robinson Jr. and Edna Mae Robinson in Chicago, Illinois. Toni had a step brother, Tillman “Moki” Browne (Deceased) and a half brother, James Casey. Toni grew up partially in Elyria, Ohio, partially in California. She graduated from Compton High School in 1960. A few years later, she met Curtis P. Turner Jr. They were married on October 31, 1964. Toni would often joke and say, “We got married on Halloween. I'm not sure who got tricked & who got treated!” Toni retired from United Airlines as a Reservations Agent after 33 years of service. After retiring, she said that she was restless and took a part-time position at Oceanic Cable for a few years. She then realized that she enjoyed the freedom of retirement & resigned. Toni loved turtles, painting & doing pottery. Toni was a very active member in the Fellowship of Alcoholics Anonymous. She was proud of having 37 years of sobriety. Toni made many friends from around the world in AA. Many of which are considered family. Toni was infamous for having an open house. Those who knew her, knew that the doors to her house were never locked. Anyone who needed a place to stay or someone to talk to, knew where to go. Toni loved being around people. Her house was also the “Gathering Place.” She would have Bar-B-Que/Pool Parties on a regular basis. On the evening of October 19, 2020 Toni passed away peacefully surrounded by family. She was precede in death by her husband, Curtis P. Turner Jr. She is survived by her brother, James Casey, her children, LaRita Strings (Rodney), Curtis A. Turner, Ciciley Y. Lewis, and Colby L. Turner, 12 Grandchildren and 11 Great-Grandchildren. Her remains will be committed to Pacific Ocean in Ewa Beach, so that she can be with her husband, Curtis P. Turner Jr. Our Mother was our Rock! She was kind, she was generous, she was loving, but most of all she was loved. Private Services Held.

The family of Toni Andrea Turner created this Life Tributes page to make it easy to share your memories.

In Loving Memory of TONI ANDREA TURNER. AKA: Toni the Turtle....

Send flowers to the Turner family.