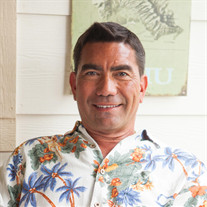 TOTI DONALD OVER MANHAN Toti Donald Over Manhan, age 51 of Waialua passed away peacefully with his wife by his side on December 27, 2018. He was born on September 14, 1967 to Terry Roger and Sandra Puanani Manhan in Honolulu, Hawaii. Toti was preceded in death by his father Terry Roger Over Manhan, second father H. William Burgess and brother H. William Burgess Jr. He is survived by his wife Tracy Richards Manhan, his mother Sandra Puanani Burgess, his son Tyler Pomaika’i Kamahao Davis, two grandchildren; Elijah Christopher Merritt and Kyana Kauanani o’Kohala Davis; his siblings, Liza Frampton, Becky McCubbin, Timothy Burgess and numerous aunties, uncles, cousins, nephews and nieces. Toti was a gifted athlete. At a young age he played baseball with PAL starting out as the catcher and ending as the pitcher. He was so strong and coordinated, he could hit the ball far enough usually ensuring a home run. During batting practice, his favorite trick was to hit the ball far down the field and then sit down to rest while someone else retrieved the ball. During middle school at Mid Pacific Institute Toti was the team captain on the water polo team. Everyone expected Toti would get a college scholarship playing a sport, however his impatience to be on his own took him down a different path. Toti’s entrepreneurial spirit began early; at the age of 12 he’d sneak out of the house at night and ride his bike down to Waikiki where he would rent a pedicab and peddle customers up and down Kalakaua Avenue to make some money. Toti met his true love Tracy Richards in 1992 on Kauai. They were together that terrifying night on 9/11/92 when Hurricane Iniki devastated much of Kauai. Back in Honolulu they married on December 30, 1994. It was a great marriage and they did everything together. Toti loved to cook and sometimes dreamed of opening up his own restaurant. The reason? He loved making people happy with a meal he had prepared himself. And he loved to eat! Helping others achieve their goals and find their own happiness brought Toti so much joy. And he always knew instinctively how to help. His genuine love and concern for other’s and his tremendous work ethic catapulted the company he created, Island Realty Group into the success that it became. Those he worked with became family. Clients became family and life long friends. All shared in life’s ups and downs, hardship and successes, births, deaths and illness together as a family. This loving family supported Toti and Tracy during their 5 year battle with cancer. Thank you. As we celebrate Toti we ask that some day soon you extend a kindness to another person in memory of his life. Make someone smile because Toti lived. Toti would love that. Celebration of Life February 2, 2019 Fellowship 9:30 - 10:30 a.m. ~ Service 10:30 a.m. Fellowship and Lunch 11:30 Salvation Army Kroc Center Hawaii Chapel 91-3257 Kualaka’I Parkway Ewa Beach, Hawaii 96706

TOTI DONALD OVER MANHAN Toti Donald Over Manhan, age 51 of Waialua passed away peacefully with his wife by his side on December 27, 2018. He was born on September 14, 1967 to Terry Roger and Sandra Puanani Manhan in Honolulu, Hawaii. Toti... View Obituary & Service Information

The family of Toti Donald Over Manhan created this Life Tributes page to make it easy to share your memories.

Send flowers to the Manhan family.