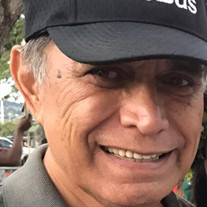 Trask Dwight Kikau Huddy, 75, of Ewa Beach died in Honolulu October 1, 2021. Born in Waipahu, Hawaii. Survived by wife Loke Dudoit Huddy. Son Peter Huddy (Lena Plunkett), daughters Tracie Huddy Balino (Kalani Balino) and Noel "Keo" Huddy (Jason Cabunoc). Daughter-in-law Tanya Lee (Kawika). Grandsons Joshua (Nomala), Cagen-Rey, Keola, Keoni and Jaykob. Grand-daughters Charis (RJ), Jaycielyn, Gieani, Kasten Blu, Kiara, Heather, Jaime-Lee, Kalei and Jaeda. Great-grandsons Zayland, Maze, Kahiau, Hazen and Chason, and Great-grandaughters Leilani, Makamae, Mya and Julia. He is also survived by brothers David S. K. Huddy (Josephine), Peter Kaapuni Jr. (Joyce), Timothy Kaapuni (Linda) and Paul "Keola" Kaapuni. Sister-in-laws Gail Kaapuni and Christmas Pagampao as well as many numerous aunties, uncles, cousins, nephews and nieces (grands and great-grands) Huddy was preceded in death by his son and daughter-in-law Dean and Malia Huddy, his parents David A. Huddy, Maile Mocksing Huddy Kaapuni and Peter Kaapuni Sr., his sister and brother-in-law Charla and Landis Lum as well as his sister-in-law Mary Kahoopii. Huddy, lived in Waipahu for 8 years then later moved to Pearl City. He attended August Ahrens Elementary, Pearl City Highlands, Kamehameha School for Boys and went on to graduate in 1964 from Waipahu High School. He landed his first full time job as a truck driver with Terminal Steel Company (1964-1965). He then went to work as a Plant Operator with Standard Oil Refinery. He left in 1967 to work for a while as a Temporary Mail Clerk until he joined up with his brother-in-law as a Purchasing Clerk/Expeditor for Pacific Construction Company. In 1975, he applied and was hired as a Bus Operator with MTL (what is now known as OTS). From being a bus driver, he then became a Temporary Dispatcher (1980), Temporary Supervisor (1983), Probationary Supervisor (1985), Permanent Supervisor, Assistant Chief Supervisor and had soon retired in 2009 as an Assistant Superintendent. Huddy devoted a lot of his time working hard to provide for his family. He as well devoted a lot of his available time in Church callings and responsibilities. In 1970, after moving his family to Ewa Beach, he had gotten affiliated with the Ewa Beach Jay Cees, the Community Boy's Baseball and Girl's Softball Programs, Kaimiloa Elementary School's Sports Programs and as a Coach at James Campbell High School (since 1973). He later joined his daughter as her Assistant Coach at Aiea Intermediate School with the Intramural Volleyball Program. Huddy himself participated in many numerous sport events whether it was outside leagues or company leagues. In fact, he formed his own mountain ball team called "Hui O Huddy" made up of talented and outstanding athletes that were dear family and friends of his. Handsome, charming, generous, loving, humble, caring and kind hearted are just a few of many traits that narrates him really well, however, Huddy was more known for his keen sense of humor. Being a man of very few words, he sure had a lot to say when it came to telling jokes. Laughter is what he brought to us all. He was a loving husband, father, grandfather/papa, great-grandfather, son, grandson, brother, uncle, nephew, brother-in-law, cousin and dear friend. He was truly loved and respected by many and will truly be missed. On behalf of Huddy and his family, we would like to express our love and appreciation to all those who have been such a big part of Huddy's life throughout his years here on earth. Your love and support for him will never be forgotten. Huddy can attest to that as he smiles down upon each and every one of you with gratitude. Memories of him will live on forever and he will forever be in our hearts. Funeral Service to Celebrate the Life of Trask Dwight Kikau Huddy will be on Saturday, November 27, 2021 at The Church Of Jesus Christ of Latter-day Saints, 91-210 Kahualii Street, Waipahu Hawaii 96797 8:00 - 8:45 am - Family Viewing 9:00 - 11:00 am - Public Viewing 11:30 am - Chapel Services 2:00 pm - Burial Service at Nuuanu Memorial Park *The family requests that Aloha attire be worn if at all possible and that you'd kindly attend at the scheduled time so that the family can have their moment of privacy with their loved one. Also please keep in mind that masks must be worn at all times and that social distancing be practiced as well.

The family of Trask Dwight Kikau Huddy created this Life Tributes page to make it easy to share your memories.

Send flowers to the Huddy family.