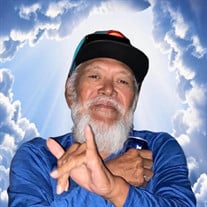 Obituary Tui Luavasa Tee Time: December 29, 1952 Final Drive: December 19, 2021 Tui Luavasa, 69, of Nanakuli, swung his last club of life on December 19, 2021 at Queens West Hospital in Ewa Beach. Tui was born to the late Fa’aniniva Gaoteote and Uaealesi Fiapule in Vatia, American Samoa and was raised with his older sister Lisa Fiapule, older brother Fiapule Gaoteote and younger brother, Raymond Luavasa. Tui moved to Oahu at the age of 4 with his family and graduated from Waipahu High School. In 1981, at the age of 29, he meet his wife, Loretta Ecsedy, got married and naturally produced (5) sons, Samson (est.1981), David (est.1983), Justin (Micah) (est.1987), Levi (est.1988) and Kyle (est.1990). However, at the innocent age of 3 (1986), David punched the first ticket to the heavenly gates. Loretta, in 2007, followed suit as she met David where never-ending happiness prevails. Tui was an avid golfer and would show up every Saturday in Makaha, rain or shine, hanging or not, to enjoy the sport he loved to play. Along with golf, firing up the grill and having a few brewskis with family and friends and spoiling his grandchildren was what he enjoyed the most. His dance moves was outrageous and outdated, but original and simple, just like he lived his life. A genius ability to make you laugh, smile and feel welcomed, regardless of who you were and where you came from, that’s what Tui was known for. Tui’s motto was “GO BIG OR GO HOME BABY” as he joyfully expressed every day to do the simplest things such as walking up the driveway, starting up his lowered Chevy Silverado with 22’ inch rims, petting his dog Blue or finishing up the last can of beer from his 30 pack Bud Light. Tui went “BIG” during his earthly presence and now it’s time to “GO HOME” and live his spiritual life with his mother, father, siblings and re-unite with his wife and son. Until we meet again dad, cheers, with your pinky up! Friends may call on Friday February 25, 2022 at the Oahu Cemetery Chapel , From 9:00am-12:00pm. Service will begin at 10:00am. Burial to follow at Sunset Memorial Park Cemetery Pearl City at 1:00pm.

The family of Tui Luavasa created this Life Tributes page to make it easy to share your memories.

Send flowers to the Luavasa family.