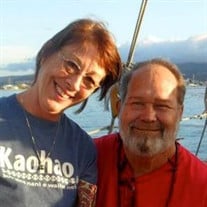 Wayne Ho'olae Sterling was born on September 24th, 1946 and passed away peacefully in his home in Kailua surrounded by Family and Friends on Wednesday evening, September 6th, 2017. He graduated from Punahou Academy in 1965, Where he excelled in sports. He was an all-star football player and held the record in shotput, at Punahou for 32 years. He attended Miami University of Ohio and graduated from the University of Hawai'i at Manoa with a degree in Travel Industry Management. His life-long career in Hotel Management, provided him travel opportunities throughout the Pacific, including Hawai'i, California, American Samoa, Tahiti, and Marshall Islands. His Management style was rooted in encouragement. He empowered his employees to take responsibility and invest themselves in their job. He didn't believe in micro-managing. No matter the position that was held, he encouraged all to give themselves completely to the job at hand. As a Vietnam veteran, Wayne had a deep desire to give back to and serve his community. He served as Bishop Museum advisory council President, Friends of Hokule'a and Hawai'iloa board member and executive director, St Christopher's Episcopal Church Treasurer and Vestry member, Windward Senior Center: Board President and member, and was also a member of Rotary International. He is survived by his Wife: Paula D. Sterling, his five children: Malia Manava Sterling, John K. Lawo, Caroline b. Lawo, R. Lilinoekekapahauomaunakea Sterling, and S. Kapuahelani Sterling (Bryson Anthony) Keolamaikalani Villarosa) . two grandchildren: Michael Anthony Carter and Ilia Kale Kaua' olikoikalani Carter. Sisters: Marion Ka'ainahuna (Sterling) Salazar and Becky Kahihilani (Sterling) Kala. Numerous nieces and nephews, hanai brothers and dear friends. Wayne is predeceased by his parents Wayne Stacy Paoa Sterling, Helen Kahihilani Pa'akonia and his brother Leon Alfred Paoa Sterling. "Dad was a force of a man. He had high expectaions for himself and for all those around him. His drive was inspiring. His character was unbreakable. His only loyalty was unfaltering. His humor was dry and witty. He loved fiercly. His sisters and brother kept him humble and grounded him in family and place. His circle of friends from "small kid times' formed deep and lasting friendships that reshaped and extended into family over the years. His family allowed him space tobe what he always been at his core, a care-taker. He was frugal to a fault, which meant that he became an incredible provider to his family and a source of strength for all. His mantra to his kids: "Pay your self first!" His love for Mom was timeless. Constant, apparent and true. He showed us everyday what it meant to care about someone more than yourself. His Children- he loved selflessly. He and mom were solid in their love for each other and raised us to know the value in strength, independence, family, generosity. Celebration of life will be held on Saturday, September 23rd at St. Christopher's Episcopal Church in Kailua 93 North Kainalu Drive at 11:00am inurnment will be held on Monday September 25th at O'ahu Cemetery at 11:00am.

Wayne Ho'olae Sterling was born on September 24th, 1946 and passed away peacefully in his home in Kailua surrounded by Family and Friends on Wednesday evening, September 6th, 2017. He graduated from Punahou Academy in 1965, Where he excelled... View Obituary & Service Information

The family of Wayne Ho'olae Sterling created this Life Tributes page to make it easy to share your memories.

Send flowers to the Sterling family.